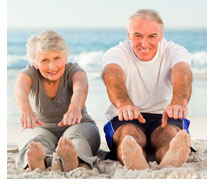 Most of us, when we think about the signs of aging, think about wrinkles, sagging skin, sun damage, aches and pains, perhaps weight gain. Biochemists and medical researchers see those same signs, but to these scientists the important changes are structural. To their eyes the significant changes are those that alter the nature of cell membranes, change DNA expression, oxidize fats and make proteins less usable. These changes alter the body's repair mechanisms.

In the dance of life, the body is continuously making and remaking itself. Aging ultimately is the failure of the body to renew itself. One of the primary ways in which this happens is through damage done to proteins when molecules of sugar and a few other compounds become inappropriately attached. In fact, glucose, the sugar the body uses for fuel, is so often a culprit in aging that some authors refer to molecules of sugar as being the body's "sands of time."

How does sugar do this damage? Let's look first at another common source of damage to tissues. The image of a cut apple browning on exposure to air is a familiar one. This example is often used to illustrate the damage that oxygen can do to cells and how antioxidants can help to protect health. However, the picture is a little more complicated than this image suggests. Antioxidants are useful, but they are only one of the body's resources in the battle against time. This is largely a result of the fact that oxygen is not the only villain when it comes to tissue damage. Damage such as that seen with the cut apple is often due to the cross-linking of sugar to protein.

Sugar in the form of glucose and related molecules is used not only as a source of fuel but also as a building block for cartilage and other tissues. However, sugar molecules can act in ways that are less desirable, as well. Much of the body is made up of proteins, especially collagen, and these proteins can be modified not just by oxidation but by interactions with sugars. Fructose ("fruit sugar") is notorious in this regard. Another class of villains is the the aldehydes, such as acetaldehyde, which is produced as an aspect of the metabolism of alcohol. Many environmental toxins involve aldehydes.

There are several other different sources of damage to proteins. Aside from oxidation and free radical damage, there is a process known as carbonylation, the attachment of 6 groups (consisting of a carbon and an oxygen bound together and written as CO-) to proteins. As we grow older, proteins collect more and more 6 groups. These misplaced groups interfere with necessary chemical interactions, weaken the structure of tissues and act as a source of "drag" on the normal metabolism of the body. Protein molecules collecting 6 groups is somewhat analogous to a ship collecting barnacles. Normal interactions are slowed, made more cumbersome or even prevented from being completed. Some authorities estimate that in older adults one third of all proteins may become carbonylated with a resulting decline in a variety of cellular functions.

A related type of damage is glycation. Glycation refers to the oxidation of protein by glucose, including the cross-linking already mentioned. In chemistry this damage is sometimes called a "browning" reaction and in fact, it is seen whenever meats are "browned" in cooking. Browning makes protein tough and resistant to penetration by water. This reaction also is called the Maillard reaction, so named for the French scientist who first described it in 1912. The result is a cross-linking of glucose or another sugar molecule to the protein, an operation that effectively prevents the protein from acting properly. Aldehydes and a number of other chemicals similarly can link to proteins. Technically, glycation, damage by aldehydes and also certain types of peroxidation are all classed as forms of carbonylation.

The most serious of these types of carbonylation is the formation of advanced glycation end products (AGEs). The prolonged exposure not only of proteins but also of lipids and cell nucleotides (chiefly DNA and RNA) to glucose results in reactions that synthesize AGEs. These AGEs bind to special receptors and this binding induces intracellular oxidative stress. The related cellular activation and generation of assorted cytokines (immune system components), growth factors and transcription factors such as nuclear factor kappa-beta can have quite negative effects. AGEs are found in large amounts in diabetics. For instance, glycation leading to AGEs occurs in the blood fragment known as Hemoglobin A1 and converts it into Hemoglobin A1C for the life of the molecule. This latter blood fragment is elevated in diabetes.

Not just diabetics, but anyone suffering from Syndrome X (the insulin resistance syndrome) will form AGEs at a heightened rate. This includes a substantial percentage of all Americans. The third National Health and Nutrition Examination Survey indicated that greater than 22 percent of the U.S. populace shows the signs of the metabolic syndrome, including three or more of these symptoms: apple-shaped fat distribution, high serum triglycerides, low ratio of high density lipoprotein (HDL) cholesterol, elevated blood pressure and elevated blood glucose.

Diabetics constitute advanced cases of a type of damage that afflicts all of us. The difference in the production of AGEs between diabetics and non-diabetics is merely one of degree. AGEs eventually accumulate in the nerve tissue and are suspected of reducing nerve conduction and activity. Similarly they are linked to changes in the ability of blood vessels to relax (leading to hypertension) and to damage to the kidneys. Reduced nerve activity, the tendency toward hypertension and decreased health of the kidneys are all typical developments in old age.

L-Carnosine: Stopping the Formation of AGEs and Brain Protein Carbonylation
The body, of course, has some powerful weapons to use in its battle against glycation. The amino acid derivative L-carnosine is one of these. Chemically it is a dipeptide (made up of two amino acids) constructed from beta-alanine and l-histidine, hence its chemical name alanylhistidine. L-carnosine is found throughout the body but it is particularly abundant in those cells which are long-lived, such as the nerve cells (neurons) and the cells of the muscles (myocytes). Similarly, L-carnosine, as is true of the antioxidant enzyme superoxide dismutase (SOD), is one of a handful of compounds which are present in tissues at levels that correlate strongly with the maximum life spans of animal species. Research interest in L-carnosine is focused on a number of issues arising from the ability of the compound to rejuvenate cells approaching senescence (failure due to advancing age).

Muscle levels of L-carnosine, which are relatively easily checked, decline approximately 63 percent between the ages of 10 and 70. Brain levels of L-carnosine begin high and remain high in comparison with the levels found in most other tissues. Scientists have speculated that this may be one reason that brain functioning is stable into old age despite the brain's dependence upon glucose for energy metabolism and the unusually high ratio of fructose to glucose in the brain.

L-carnosine, however, performs more than just one role. Experiments have shown that aside from being a powerful antioxidant, it helps to prevent glycation. L-carnosine has been shown to "sacrifice" itself as a substitute victim to glycating agents, thus sparing the proteins and membranes which otherwise would have been the targets of glycation. Furthermore, there is evidence that L-carnosine reacts with and removes the 6 groups of glycated proteins. As yet another benefit, it detoxifies aldehydes and related compounds and it chelates metal ions which otherwise might be available to cause damage by generating free radicals.

Promoting Cellular Rejuvenation
The ultimate test of cellular rejuvenation is the way in which an animal ages. A Russian study tested the effect of carnosine on life span and indicators of senescence in age-accelerated mice by giving half the mice carnosine in their drinking water starting at two months of age. L-carnosine did not alter the 15 month maximum life span of this mouse strain, but the mice given carnosine were about twice as likely to reach the "ripe old age" of 12 months as were untreated mice. L-carnosine extended the life span of the treated mice by 20 percent on average.

Tuning Up Your Sugar Metabolism
Remember, the more excess glucose that is available in the blood, the more opportunity for cross-linking with proteins. L-carnosine may be a star player in defending against glycation, but every player still needs a team. Other supplements help. Trivalent chromium is important primarily to those individuals whose diets are deficient in chromium. Contemporary research has identified compounds which have much stronger effects directly upon glucose transport, such as alpha-lipoic acid (which doubles as an incredible antioxidant) and colosolic acid. Phytonutrients also pitch in. The compounds found in herbs such as green tea, bilberry and eucalyptus leaf have proven efficacy in reducing glycation. Some products, such as Jarrow Formulas' Glucose Optimizer, have been carefully formulated to include these and other nutrients for a harmony of synergy.

So, if you are worried about sugar being the body's "sand of time," do something about it. Eating less sugar and more phytonutrients is a start. Supplements, however, can help bolster your defenses against glycation. L-carnosine and sugar-regulating nutrients may not stop the clock, but they might help to slow it down.