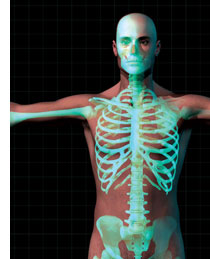 In his bestseller, “Spontaneous Healing,” Dr. Andrew Weil describes his introduction to osteopathic medicine by practitioner Robert Fulford in the 1980s. After watching and studying with Fulford, who was one of the nation’s leading osteopathic physicians, Weil became an ardent convert to a specialty that remains largely unknown to the public: osteopathy in the cranial field.


“Gradually I began to realize I was seeing something quite extraordinary,” wrote the Harvard-trained M.D., who was unfamiliar with this “advanced system of manual medicine.”

“It was non-violent medicine that did not suppress disease but rather encouraged the body’s own healing potential to express itself.” After that, Dr. Weil integrated the basic tenets of osteopathy into his own practice, which he defines as: The body wants to be healthy. Healing is a natural power. The body is a whole, and all its parts are connected. There is no separation of mind and body.

Today, as 78 million baby boomers begin to experience the physiological changes associated with getting older, the osteopathic principles that inspired Weil can play a prominent role in improving general health, staving off disease and fostering successful aging.

While conventional (allopathic) medicine targets a specific organ or ailment, osteopathy addresses the entire human organism (all organ systems, connective tissue, bodily fluids, musculoskeletal apparatus, etc). It recognizes the role the musculoskeletal system plays and the dynamic relationship between structure and function in health and disease. The Doctor of Osteopathy (DO), who is a fullytrained physician licensed to practice the entire range of medicine and surgery, restores health by addressing the underlying anatomical disorders that trigger chronic pain and illness. The result is often greater health.

“By the time we reach our 40s and 50s most people have had a significant amount of trauma, and usually have plenty to treat,” says Los Angeles osteopath Eric Dolgin, who is President emeritus of the prestigious Cranial Academy and a colleague of Dr. Fulford. “And unless someone has had a perfect lifestyle the body accumulates trauma which compromises the immune system.”

As such, osteopathy is effective for a range of issues and conditions that arise when people reach mid-life, from general aches and fatigue to pain from arthritis, cancer, surgeries and backaches, to name a few. Treatment by an osteopath can boost vitality, reduce pain and foster what’s called “healthy aging” by identifying the most mysterious dysfunction in the body (i.e. blockages in cerebrospinal fluid, impaired central nervous system, etc).

Meanwhile, research is starting to quantify these benefits practitioners have been preaching about for more than 100 years. In 1999, for example, a study published in the prestigious medical publication, The New England Journal of Medicine, found that osteopathic manipulation works as well, or better, than analgesics and physical therapy for treating lower back pain, which affects 65 million Americans and is one of the most common complaints of aging boomers.

“Most of these problems can be addressed by freeing up the body and getting things working better,” continues Dolgin. “Some things naturally occur when you get older. The body doesn’t work as efficiently. You don’t have the same recuperative power. But that doesn’t mean you can’t do a lot to prevent disease or that you have to live with pain.”

While the cause of any given syndrome is multi-factorial, the osteopath is trained to identify the anatomical disorders unique to each case. “Problems in any one area will cause problems in all areas,” says Dr. Dolgin, “Everything gets disrupted as a whole and not as an isolated part.” In an otherwise healthy individual, for example, fatigue can feasibly be attributed to a number of factors once anemia and other diseases have been ruled out. But to the osteopath, the most puzzling cases can be diagnosed owing to the practitioner's ability to pinpoint hard-to-read dysfunction: depressed rhythmic flow of the central nervous system, overly tight membranes in the cranium, blockages in cerebrospinal fluid, etc.

Like most patients, Dr. Weil found the treatment “so gentle” he was worried his condition—acute jaw pain caused by a trauma to the face—had been left untreated. Shortly after treatment, Dr. Weil said his pain had cleared and he could open and close his jaw, once again. The osteopath mentioned the force of the blow had left a trail of trauma in the fascia (connective tissue). It was the osteopath’s job to remove the tension in the tissues, pulling and tugging from the jaw to the fossa (part of the jaw joint).

With aging the body often expresses traumas that occurred years, even decades, earlier. From the osteopath’s perspective the resulting symptoms too often relegated to “you’re just getting older” get treated. Osteopathic physicians recognize that early trauma and illness can lead to more serious issues by disturbing the tissues and altering function. As the tissues twist, compress and contract, fluid continuity becomes compromised, and normal physiology is impaired. If left untreated, this altered tissue function can stay present throughout a person’s life, long after the disruptive influence has passed.

For this reason, an osteopath will often take a detailed personal and medical history from a new patient, although Dolgin says most can feel the trauma in a patient’s body. Even the individual without any noticeable symptoms or physical problems benefits from the osteopath’s manipulation as a preventive measure. “Someone can come in without any complaints and we can identify a structural problem that keeps the body from working well,” says Dolgin. “By treating these (abnormalities) we can get the body working better and avoid future problems.”

Los Angeles celebrity chef Kris McKay was in severe pain when she found her way to Dolgin’s Santa Monica office. McKay, 44, incurred extensive soft tissue damage and musculoskeletal trauma when her car was hit from behind by another vehicle going 65 miles per hour. The impact caused pain in McKay’s back and shoulders that radiated down her arms and legs. Pre-existing fibromyalgia exacerbated the pain. It was further intensified by chiropractic treatments immediately after the accident, said McKay.

“The force of the impact had left an imprint on every cell of Kris’ body,” says Dolgin. He uses the metaphor of a bucket of water on the car seat rather than a human being. “The fluid in her cells was like water sloshing out of the bucket. Basically, the bodily fluids have a complex mixture of proteins, electrolytes and other substances. Jarring these fluid materials will leave an imprint of trauma throughout the body. Kris’ wrist was slammed against the steering wheel. Her head snapped back and forth yanking on her tailbone. The reverberation of the force resulted in a lot of pain radiating down her neck and legs.

Locating the pivotal restrictions, Dolgin started working to loosen blockages in the sacrum, diaphragm and the lower extremities. He treated McKay’s lower lumbar region working to loosen the connective tissue that felt like a tangled telephone cord stretching from the pelvic region to the base of her skull. Ultimately, McKay’s body returned to normal after several months of treatment. “I have no residual damage,” she says. “As far as I’m concerned I’m cured.”

The good news for aging baby boomers is that the benefits of osteopathy can impact their daily lives. Taking common medications, such as blood pressure lowering drugs, is often unnecessary when the body’s systems are corrected through osteopathy. For many people osteopathic treatment also provides relief from irritable bowel syndromes and arthritis-related pain. UCLA trained M.D., Robert Gramlich was suffering from severe skeletal and rheumatoid pain when he sought Dolgin’s help. Osteopathy was compatible with Gramlich’s homeopathic philosophy of working with the body’s curative forces rather than against them. “I think of osteopathy as one of the forms of energy medicine,” says Gramlich. “If you can bolster the immune system to a state of optimum vitality then one should have a symptom-free life.” Over four months Dolgin was able to effectively reduce Gramlich’s pain and increase mobility by loosening the soft tissue around the fused vertebra.

In the past decade as society has moved towards a more holistic view of healthy aging and longevity, individuals and practitioners have held up the banner of prevention. As such, practitioners prescribe an osteopathic check-up every six months for early detection of structural problems. When detected early, treatment through manual medicine can correct potentially serious damage and disease. “We can identify problem areas and keep the body working well to avoid future pathology,” says Dolgin.

That’s what Dr. Andrew Taylor Still envisioned in 1874 when he founded a new system of medicine as a counter to conventional practice. Osteopathy, as he named it, would consist of manipulation of the musculoskeletal system and sparingly use drugs. Dr. Still came up with the word by blending two Greek roots—osteon for bone and pathos for suffering—to communicate his theory that disease was etiologically grounded in a malfunctioning musculoskeletal system. By diagnosing and treating the musculoskeletal system, he believed that physicians could treat a variety of diseases and spare patients from the side-effects of drugs. Optimal health is possible only when all the tissues and cells of the body function together, and disease could be caused by as little as a slight anatomical deviation, he contended.

At the heart of Still’s system of medical practice was the core belief that human beings are more than a physical body and compilation of parts. The relationship between body, mind, emotion and spirit had to be addressed. Over time, respected doctors like Weil and Dolgin and thousands of osteopathic physicians in the U.S. today built their practices on these principles. The result is a dynamic kind of treatment that may ultimately stave off disease, cure pain and foster the “successful” aging that has become society’s goal.