Editor's Note: This third story in Kat James' series featuring the power of the little-known hormone, leptin, highlights common, living examples of the vast range of health issues dramatically and predictably affected by the recovery of function of the hormone, leptin, which circulates in all humans and most other animals and impacts literally all biological functions. For introductory and other stories on leptin's power, view James' first two articles on the subject in TotalHealth. Catching Up With Leptin Pioneer Kat James and Transforming Journeys Part 1.

TRANSFORMED BEYOND BELIEF:
Former Pescatarian Couple Breaks Through Chronic Health Barriers With The POWER OF LEPTIN

Charles and Toby Geschwind—both in their early seventies— have seen more than their share of major health scares. Having become self-described natural health investigators out of necessity they've thus far succeeded in averting their own respective health disasters. Toby sent her own form of ovarian cancer into remission with a combination of diet and chemotherapy, though her cancer came back recently, and the chemo caused uncomfortable digestive and regularity challenges. Charles' prostate cancer and diabetes went into remission with his mix of conventional and nutritional treatment choices, though his pre-diabetes has lingered, and life-long heart beat irregularities have persisted, requiring (at least according to his somewhat famous cardiologist) life-long control with prescription drugs, which carry their own significant risks.

In November of 2017, Charles and Toby happened on a lecture I gave in New York City and learned of my educational retreats focused on helping people recover the functioning of the master hormone, leptin (a hormone in our bodies that is malfunctioning in most North Americans). My health protocols—honed over seventeen years of hands-on coaching— were derived from my own original protocol that healed my own near-fatal health crises. 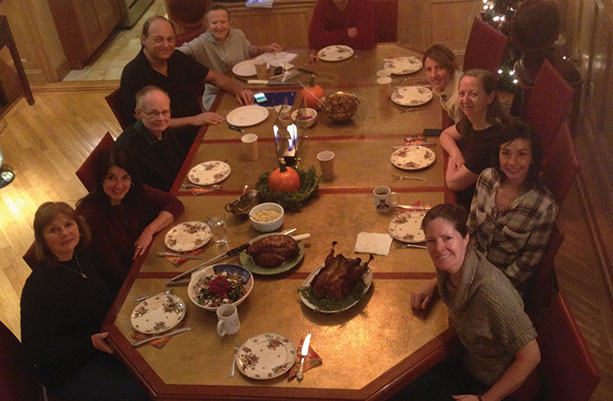 Charles and Toby were part of a retreat group that convened at the historic
1880s ‘Harlem Jazz and Gospel Mansion” to learn about leptin.

In spite of many reservations, including their kosher restrictions, avoidance of red meat for ten years due to Charles' "A-fib" (irregular heartbeat), high blood pressure, and diabetic history, plus their relegation of fat (especially animal fat) to the dietary villain list on the advice of Charles' well-known cardiologist…my promotion of high-fat, meat, cholesterol, and certain dairy foods and limitation on so many of their low-fat and "health foods" including oatmeal, beans, and several fruits sounded like crazy talk at first to the Geschwinds. But the success stories, such as that of Shianne Lombard's, told here in TotalHealth a few months back, plus many more accounts of dramatic turnarounds in digestive, weight, sleep, energy and other issues they could relate to, convinced them to join me at a retreat in a landmark mansion in upper Manhattan only ten days following that lecture. Among many other "oddities," plunging into my protocol would involve moving past their pescatarian (fish was their only animal food) limitations, finding their optimal individual fat and protein ratios, incorporating certain strategic dairy products they'd long since "banned", and incorporating targeted supplements, while cutting out basically anything that would cause a rise in their own individual insulin and leptin hormones (this is an individualized factor subject to one's health and hereditary history). But plunge in they did. And about ten days later, both had literally transformed into very different biochemical beings.

Charles started my regimen two days prior to the retreat, going through the expected low-energy day. By the day after he arrived at the retreat he was surprised to experience his first sleep through the night with only one waking in at least twenty years of waking 4–5 times. This common sign of recovered leptin function (leptin function recovery takes as little as three to four days) has proved permanent for Charles up to this writing, a month and a half later. His face started to change visibly to everyone by the second day at the mansion coinciding with loss of fluid (again, coinciding with the usual transitional timing and signs of leptin sensitivity).

Toby began the regimen two days later, and thus went through the transitional discomforts on-site at the retreat. Weaning off of sugar as one's primary fuel and transitioning to the body burning fat as its new primary fuel, accompanies a drop-out in energy and marked die-off of sugar-fed yeast and fungi which can cause low energy and flu-like symptoms for a day or two. Seeing Charles changes (and that of several others at the retreat) in advance of hers was all the encouragement she needed to wait it out. On the fourth day Toby began to feel better. In the meantime, both Toby's and Charles' first bites of high-quality, grass-fed meat were surreal for them. Their bodies' immediate positive responses were encouraging (I could relate as I watched them, remembering my own first bite of meat after seven years away from it).

Once home, physical changes were even more obvious and progressive, yet the initial surprise and opposition to the new diet from family members popped up. In Charles' words: "At first it was difficult for all of us to accept Kat's principles which were the opposite of everything we'd been told to do for our cancer, my heart disease, and my pre-diabetes. My younger sister is a nutritionist and told us it went against all she'd learned as well. But when we got home and my whole family noticed how different I looked and the continued changes, including my being able to walk greater and greater distances and up stairs without getting out of breath, they began to support our new way of life fully. The teller at my bank even called me over and commented on how I was looking. The change in only a handful of days was that dramatic.

Within a week after we got home, Toby's cramps and poor elimination issues that had worsened with chemo soon fully resolved and our energy went through the roof. At that point, even my nutritionist sister was on-board with this approach.

Charles' celebrity cardiologist was less embracing of what he'd embarked on and—even after dramatic swings to normal range blood pressure, blood sugar, and heart test values—still didn't really want to hear about it. "I took all of the blood pressure, blood sugar, stress, and heart monitor tests around December 5th," said Charles. "He called me the next day and told me to get off of my Metoprolol (a heartbeat-regulating drug with some significant side-effects) 'right away.' We re-tested my heart the day after I went off the drug and he told me that without medication my heart rate was now normal. 'I don't know what you did, but all of your numbers are perfect' is all he said. He is considered one of the most brilliant cardiologists, but when I started to tell him about this regimen, I could tell he did not want to hear about it. This is the first time in at least twelve years that I'm testing normal. I've had a racing heart all of my life. Now, for the first time, I have no a-fib.

My new ability to sleep through the night since the second day on this protocol has also continued ever since. I could never fall asleep at a decent hour before and always got up numerous times. Now I'm up at seven taking a walk because I want to. That's something I've never done. Both Toby's energy and mine is through the roof. My clothes keep getting looser. My favorite Movado watch was too tight to wear on October 30th. I had a link removed a couple of weeks after the retreat because it was too loose. My clothes have continued to get looser and looser. I'm gaining strength and muscle. I can now walk for long periods without getting out of breath.

What's amazing is I've always been an overweight, yo-yo dieter. This time I don't feel any self-deprivation. I used to be a bottomless pit. Now, all craving is gone. I look at and smell the "normal" food others are eating that I used to eat and it literally nauseates me now. I just don't want those foods. I do love what I'm eating now, though. That first steak was mind-blowing and I now feel how my body needs it now and then."

Toby was initially even more hesitant than Charles to reintroduce red meat. But after her grimacing first bite, a change in expression followed "this is pretty darn good" she remarked in front of the group. And with all of the other tenets of the program in place, her physical (and ideological) transformation soon became apparent. Once home, to her amazement, her chronic cramping, digestive and elimination problems subsided within a week to the point of being completely resolved.

Toby's CA-125 Tests and Cancer Considerations
Cancer Antigen 125 (CA-125) is a tumor marker test that is used to measure cancer-related proteins in the blood. It's reliability is controversial, but Toby is a strong advocate for all women getting the test, as high numbers very often coincide with cancer being present whereas below 35, and particularly single-digit numbers generally correspond with less presence of cancer.

"Toby's CA-125 reading was 375 when she was first diagnosed in March, 2012 and then the day of the operation one week later it was 775. After her chemo and dietary changes she had gotten the number as low as 10.3. After the retreat it tested at 8.7, which is hard to get down to because the test also picks up various inflammation issues too. Needless to say she is very happy."

A quick search of the terms "leptin" and "cancer" will give further illumination as to their relationship. What you want to strive for, as with insulin, is to avoid rises in leptin, due to dietary sugars. When leptin rises, so does proliferation of various cancers. Recovering leptin function is only possible when leptin levels are kept consistently low through dietary avoidance of carbs and sugar.

On His Toes
Charles was scheduled to have surgery on two of his toes, which had become immobile, at the end of November. After several other cases of recovered toe mobility with my protocol, I suggested that he postpone the operation with his doctor's approval. Now scheduled for three weeks after the publication of this article, Charles is hopeful that the surgery can be cancelled as he is seeing return of flexibility to those toes.

"This program was the best thing we've ever done for our health. We even learned to do this with all of our kosher requirements, which makes all the difference to us. The richness and flavor of the food has convinced us that we could do this long-term. In fact not long after the retreat, we went to an elaborate Chanukah party where there were tons of inappropriate food choices...we weren't at all tempted to go off course."

Kat James is an award-winning author, transformational nutrition and beauty pioneer, and syndicated radio host who’s been called "a master of self-transformation" by SELF magazine in response to her stunning recovery from liver, autoimmune, and eating disorders that nearly took her life. Her controversial and pioneering dietary method—now recommended at top neurologic, fertility, functional medicine, bariatric, and metabolic clinics—has left countless dramatic success stories in its wake and been featured at top spas and institutions such as Omega Institute, as well as on "Today," Fox, and, PBS among, others. To learn more about her original Total Transformation® Programs and TelePrograms, radio show on XM/SIRIUS, or her Silver Nautilus award-winning bestseller, The Truth About Beauty, visit her website since 1998.