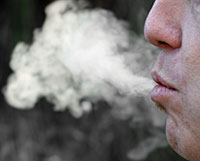 Abnormal or changes to normal cells, can result in cancer. Oral cancer can form in any part of the mouth or throat, such as:

The tongue and floor of the mouth have the highest risk for cancer. Most at risk are males over the age of 40, and tobacco or alcohol use. Besides tobacco and alcohol, another cause has now been connected with exposure to the HPV-16 virus (human papilloma virus version 16). This is the same virus largely responsible for cervical cancers in women. Scientists believe this could be related to some genetic disposition. Unfortunately, oral cancer may not be diagnosed unless it has spread to other locations.

Mouth & Throat Cancer Risk Factors
According to studies and statistics, tobacco is the greatest risk factor for cancer of the mouth and throat. Although there are other risk factors, tobacco is the largest known cause of developing the disease. Tobacco contains DNA-damaging chemicals that increase the risk of mouth and throat cancer. According to the American Cancer Society, these chemicals damage cells in the lining of the tissues, which results in cells to grow more rapidly.

Cigarettes: It's reported that smoking cigarettes kills more people than AIDS, alcohol, drug abuse, car crashes, murders, suicides, and fires—combined! Not only are smoking cigarettes responsible for increasing the risk of lung cancer, but it also doubles the risk for heart disease.

Cigars and Pipes: You probably didn't know that some cigars contain as much tobacco as an entire pack of cigarettes. According to the Oral Cancer Foundation, cigars are a major source of secondhand smoke, which contains over 4,000 chemicals—200 are poisons, 63 of which cause cancer. Since cigars go through a long process of fermentation, more dangerous chemicals are produced.

It's a myth that if you don't inhale cigarette smoke or you only smoke pipes or cigars, you're not at risk or danger of harm. Damage occurs to living cells with any exposure to smoke. Even if not inhaled, there is a risk of harm to the lips, mouth, tongue, throat and larynx to cancer. The typical exposure to smoke is typically longer with cigar and pipe than cigarettes. Some of the harmful and toxic chemicals found in cigars include carbon monoxide, hydrocarbons, ammonia, cadmium and other substances.

Cigar and pipe smoking have been associated with males between the age of 35 and 64 with higher educational backgrounds and income. However, recent studies suggest teenagers and young adults, between ages of 18–24 have been increasingly using cigars. Women have also increased smoking cigars by five times in recent years, based on a study among California adults in 1990 and 1996.

It is estimated there are 10 million smokeless tobacco users, of which three million are under the age of 21. Rodeos, rock stars and sports heroes are motivated to be the marketing agents for the tobacco industry, which has targeted male adolescents. These same tobacco companies sponsor rock concerts, rodeos, auto racing and tractor pulls that advertise their products. It's also become popular among young women, who use it to curb appetite for weight loss.

Oral Cancer Symptoms
If you notice any of the following in your mouth that are not changing and last more than two weeks, make an appointment to see your physician or dentist.

If your doctor or dentist suspects an abnormal area following an exam, a small sample of tissue is removed (biopsy) to check for cancer cells. A biopsy is done with local anesthesia or general anesthesia. The sample is sent to a pathologist who checks for cancer cells under a microscope.

If the test is positive for cancer cells, the doctor will want to know the stage (level or extent) of the cancer. To determine the stage, lab tests may involve endoscopy, which is used by the doctor examining the throat and lungs with a thin, lighted tube (endoscope).

Dental x-rays, chest x-rays, CT scan and MRI may also be used to determine the stage of oral cancer.

Cancer of the mouth and throat is described by five stages.

Stage I
At this beginning stage, the cancer is less than two centimeters (about one inch) in size. It has not spread to the lymph nodes around the mouth and neck. Lymph nodes are responsible for producing and storing infection-fighting cells.

Stage II
The cancer is more than two centimeters in size, but less than four centimeters (less than two inches), and has not spread to lymph nodes in the area.

Stage III
This stage may include:

Stage IV
This more advanced stage may include:

Depending on the stage of development, a combination or single forms of therapy may be used to stop the spread and treatment of oral cancer.

Chemotherapy
Chemotherapy uses anticancer drugs to kill cancer cells. It's usually given by injection as an outpatient part of the hospital, at the doctor's office or at home.

Surgery
Surgery involves removing the affected tissues. A small tumor may not result in lasting problems. Removing a large tumor may involve also removing part of the palate, tongue or jaw.

Alternative treatments
Alternative treatments may be offered for cancer cures, but they have not been tested or found to be effective in clinical trials. Complementary methods may enhance or support cancer therapy but are not considered as a cure for cancer. These may include acupuncture, meditation, prayer, and herbal medicine.

Before starting any treatment, certain preventive measures should be in order:

It's also important for those diagnosed with oral cancer to have an active part in choosing the type of treatment with the doctor. Each treatment has possible side effects. The National Cancer Institute (http://cancer.gov) has information about supportive care (1.800.4.CANCER).