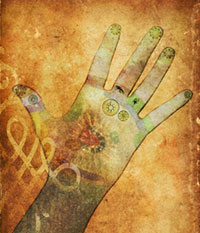 Some years ago I came across Eric Pearl's book, The Reconnection: Heal Others, Heal Yourself—and couldn't put it down. An experienced chiropractor, Eric began to notice that his patients were healing spontaneously when he worked on them. He'd feel sensations in his hands, they'd feel sensations in their bodies—and the individual would oftentimes be instantly and permanently healed of their ailments. These could be cancer, epilepsy, chronic fatigue syndrome, rheumatoid and osteoarthritis, chronic pain or even AIDS-related diseases—issues not generally targeted by chiropractic.

As a practitioner of energy psychology and follower of energy healing in general, I was intrigued. Then, after hearing him speak at the annual Energy Psychology conference in Toronto, (CAIET.org), I was hooked. Eric is funny, smart, and totally charming, more like a borcht belt stand-up comic than our usual notion of healer-speaker-expert.

Then I took the plunge and went to his annual Reconnection Healing seminar in Los Angeles. I was not disappointed; rather, I was educated entertained and uplifted. I saw with my own eyes how "spontaneous" healing can occur outside our usual belief systems of time and possibility. I was impressed at my ability and that of others to step into the process and have a real effect. They sure didn't teach us this in medical school!

What Eric had accidentally stumbled across was what he describes as a "unique frequency or bandwidth" comprised of light, information and energy that actually corrects physical and emotional imbalances. As I learned in his seminar, he teaches people how to become a catalyst in healing others by learning how to interact with these new frequencies that "reconnect" us to our "original blueprint." Stay with me here-there is some science to follow.

While seeing injured and chronically ill people get off a table instantly healed may seem like "magic" or "faith," (and we know the power of the placebo effect) there is a growing body of hard science that is emerging on Reconnective Healing, explaining why it is a fast-growing new form of alternative healing world-over.

Many of their studies are chronicled in the recent book, Science Confirms Reconnective Healing by Korotkov. Here are just a few of those findings:

What these scientists surmise from their findings is that Pearl is working with a cutting-edge new form of "information medicine"—in the words of Tiller—who explains further: "When information carried through these frequencies is introduced, it creates coherence and order within the field and the body itself." The result can be seen in the dramatic reports of regeneration instead of degeneration, and account after account of apparently unexplainable, often instantaneous and life-long healings.

These bandwidths, which seem to be newly present in our planetary energy field, appear to innately "know" what needs to be healed. Pearl says that you are returned to an optimal and appropriate state of balance merely by experiencing or interacting with this healing continuum. The trained Reconnective Healing practitioner simply facilitates the process. By feeling the frequencies and playing with them—an act that appears as if the healer is stretching taffy in the air—physical and emotional health shifts suddenly come about.

We can see the impact on the person receiving Reconnective Healing as their closed eyes flutter and begin to rapidly dart back and forth, fingers or feet move as if of their own volition, and even involuntary muscles of the face move in a way that are unlikely to happen intentionally. All this occurs even though the practitioner isn't even touching the client! These involuntary body movements—referred to as registers—are a demonstration that the client has entered into a different state, one where healing often occurs.

The information-laden frequencies reconnect us to our original fullness as human beings, according to Pearl, and seemingly restore us to a more complete connection with the universe.

More than a decade ago, when Pearl perceived the results of what was transpiring with his patients and saw its transformative power, he closed his practice as a chiropractor, so he could go out and share this skill with the world. Pearl's book is now published in 36 languages and he has taught Reconnective Healing to 70,000 people around the globe in more than 70 countries.

Today when the cost of healthcare has skyrocketed and insurance is either unaffordable or barely covers what the average person requires to stay healthy, there is true benefit in literally taking healing into our own hands for ourselves, our loved ones and for those we can serve. Reconnective Healing, with its growing body of scientific proof and its legions of those who point to its efficacy, is a promising breakthrough.

While I am quite impressed here, both with my personal experience at the seminar, as well as the research data, I also know there are many other forms and schools of healing, some with their own well-documented research. Is this method substantially different from others? I invite your comments about how they compare, especially if you've had personal experience in any of these.

If you want to know more about about Reconnective Healing, go to: www.TheReconnection.com.