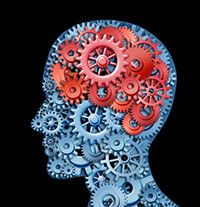 As an integrative/holistic psychiatrist, I have been following genetic aspects of mental illness for some time. One of my favorite sources of information here is William Walsh PhD, an internationally recognized expert in the field of nutritional medicine. He shows how you can indeed change your mental genes—and in simple cases, in the comfort of your own home! I met this brilliant and charming man many years ago at a conference when he presented his research on violence, autism, and schizophrenia, carrying forward the ground-breaking work of pioneer Dr. Carl Pfeiffer.

Epigenetics is a word unfamiliar to most of us, but is becoming better known daily. This emerging science1,2 is steadily revealing the causes of many of the world's most challenging medical disorders, such as cancer and heart disease, and is providing a roadmap for developing vastly improved therapies. New research indicates that many mental disorders also appear to be epigenetic in nature, and that improved treatments are available for such conditions as schizophrenia, clinical depression, autism, ADHD, and criminal behavior.3 Moreover, these new therapies are based on natural substances rather than pharmaceutical drugs, with their inexact targets and difficult side effects. This is the subject of Dr. Walsh's information-packed new book, Nutrient Power.4

There are more than a trillion cells in the human body, and each cell contains an identical copy of a person's DNA. However, the genes expressed in brain, kidney, skin, heart and other tissues must clearly be different from each other, and this gene programming is established in a fetus during the first few months of development. In order to obtain the correct mix of enzymes and proteins in different organs, some genes are selectively "turned off" and others "turned on". This process is called epigenetics which means "above genetics".5 We are now learning that many diseases previously thought to be genetic are instead epigenetic in nature. The culprit is usually an environmental insult that alters gene expression "bookmarks" either in utero or later in life. Since deviant bookmarks can survive many cell divisions, the problem doesn't go away.

There is considerable evidence that epigenetic errors are responsible for the mental breakdowns in schizophrenia, bipolar disorder, the sudden emergence of OCD, and the shocking symptoms associated with severe autism.

Dr. Walsh's book presents a science-based nutrient therapy system that could help millions of individuals who are challenged by mental disorders. This approach recognizes that nutrient imbalances can alter brain levels of key neurotransmitters, disrupt gene expression of proteins and enzymes, and cripple the body's protection against environmental toxins. The author's database containing millions of chemical factors in blood, urine, and tissues has identified brain-changing nutrient imbalances in patients diagnosed with ADHD, autism, behavior disorders, depression, schizophrenia, and Alzheimer's Disease. On a practical level, we test patients, then treat based on the results.

Nutrient Power describes individualized nutrient therapy treatments that have produced thousands of reports of recovery. A seeming paradox, this modality is more scientific than trial-and- error use of psychiatric drugs, and is aimed a true normalization of the brain.

It's clear from my 25-plus years of psychiatric practice that Dr. Walsh is correct: Depression, schizophrenia, and ADHD are umbrella terms that encompass disorders with widely differing brain chemistries and symptoms. This book describes nutrient therapies tailored for five depression biotypes, three schizophrenia biotypes, and various ADHD conditions. Other book highlights include the Walsh Theory of Schizophrenia; an epigenetic model of autism; a promising new Alzheimer's treatment; and recommendations for reducing crime and violence.6 I can attest to some of these methods since I have been treating patients successfully with targeted nutrients for many years. Dr. Walsh refines the approach, has new scientific explanations for why they work, and shows how poor genetic expression can be completely corrected with the specific diet and supplement recommendations.

Dr. Walsh states that today's emphasis on prescription medications will not stand the test of time, and that psychiatry needs a new direction. He points out that psychiatric drugs suffer from a fundamental limitation - they involve foreign molecules that result in an abnormal condition rather than producing desired normalcy. Psychiatric medications have served society well over the past 50 years, but the need for drug therapies will gradually fade away as brain science advances.

He recommends a national research effort to develop biochemical therapies that use chemicals natural to the body to normalize brain function, and thus avoid the nagging problem of drug side effects. If he's right, we could be approaching a new era in the field of mental health. Marguerite Kelly, syndicated columnist for the Washington Post, state, and I fully agree, that "This book could change medical history".

Information about Dr. Walsh and copies of Nutrient Power are available here.

About the author: Dr. William J. Walsh is president or the nonprofit Walsh Research Institute in Illinois and directs physician-training programs internationally including in Australia and Norway. Dr. Walsh has authored more than 200 scientific articles and reports and has five patents. He has presented his experimental research at the American Psychiatric Association, the U.S. Senate, the National Institutes of Mental Health, and has been a speaker at 28 international conferences. He has developed biochemical treatments for patients with behavioral disorders, ADHD, autism, depression, anxiety disorders, schizophrenia, and Alzheimer's disease that are used by doctors throughout the world.