As we grow older, we may grow wiser, but we can also experience age-related memory impairment (ARMI). ARMI is relatively common1 and should not be confused with Alzheimer’s or other dementia, while ARMI is simply mild memory problems associated with normal aging (e.g. “Where did I put my keys?”). Even so, the memory loss and cognitive slowing associated with ARMI can interfere with our daily routines.2 In fact, according to a national survey, worries over retaining mental sharpness with age was the number two health concern among consumers (second only to worries about continuing with normal activities with age).3

So what can we do to help maintain mental sharpness with aging? Aside from eating a healthy diet and getting regular exercise (which is good advice for everybody in all age groups), there are some very specific nutraceuticals (i.e. vitamins, herbs, amino acids), which have been shown to be effective for just this purpose. These include Bacopa monnieri leaf extract, Panax ginseng root extract, Rhodiola rosea root extract, natural caffeine and L-theanine, folic acid and vitamin B12.

Bacopa monnieri leaf extract
The leaves of the Bacopa monnieri plant have been used for centuries in the traditional East Indian system of healthcare (i.e. Ayurveda) for purposes of promoting “healthy longevity, and strengthening life, brain, and mind.”4 While that is certainly impressive, it is even more impressive that several modern, human clinical studies have been conducted showing that supplementation with Bacopa helped: 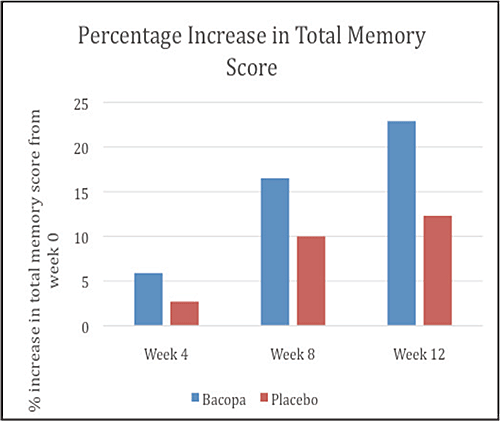 Most of these studies5,6,7,8,9,10,11 found that daily supplementation with 300 mg of Bacopa monnieri leaf extract (standardized for 50 percent total bacosides), provided significant benefits by week 12—although progressive benefits in Total Memory Score were also seen during week four and eight as well.12

It should also be noted that these studies were conducted in men and women who were at least 40 years old, and in most cases more than 55 years old. That means that you’re more likely to experience similar benefits if you’re middle-aged and older, rather than if you’re in your 20s or 30s.

If you’re wondering how Bacopa works, research13 suggests that it helps to maintain healthy levels of acetylcholine, a compound your body makes that works in your brain to help facilitate memory, learning ability and cognitive performance.

Panax ginseng root extract
Panax ginseng root, or ginseng for short, is a traditional Chinese herb, which has been used for thousands of years for various aspects of healthcare. It is also one of the most widely-researched herbs in modern science with over 5,000 published studies. Ginseng belongs to a category of herbs known as adaptogens. Adaptogens are herbs that help stabilize physiological processes and promote homeostasis (i.e. stable, healthy functioning of the body), especially in the case of stress and fatigue. This property was seen in two human clinical studies14,15 examining the effects of ginseng on mental performance. The results demonstrated that 200 mg of ginseng root extract daily:

While many nutraceuticals may take weeks to work, these studies found that ginseng root extract provided beneficial results in as little as 60 minutes.

Rhodiola rosea root extract
Like ginseng, Rhodiola rosea root is an adaptogen. This plant has been used for centuries in the traditional systems of healthcare throughout Russia, Scandinavia, and other countries where it was used to increase physical endurance, work productivity, longevity, and to treat fatigue, mood and promote a healthy nervous system.16 Currently, there are over 500 studies on Rhodiola demonstrating the value of this plant. The reason for its inclusion in Ageless Memory is that human clinical research17,18,19 shows that supplementation with Rhodiola:

Natural Caffeine and L-Theanine
Black tea leaf extract provides natural caffeine as well as the amino acid L-theanine. This is an important distinction because not all sources of caffeine are natural, and not all sources provide L-theanine as well. Consider that if you buy one of those popular energy shots that are supposed to last a few hours, they contain caffeine anhydrous. That’s a synthetic form of caffeine. And while coffee certainly contains natural caffeine, we all know about the jittery effect on your nerves if you get too much—and some of the freshly brewed coffee you get from popular coffee houses can contain hundreds of milligrams of caffeine. Tea, on the other hand, also provides L-theanine, which has a calming effect. That’s likely the reason why drinking tea isn’t typically associated with caffeine jitters like coffee—it contains L-theanine, which helps sooth over-stimulated nerves. Now to be clear, the amount of caffeine used in research with L-theanine is only 50 mg—that’s the amount of caffeine you’d typically find in one-half cup of moderately brewed coffee. Furthermore, 100 mg of L-theanine was used alongside the caffeine. When this combination was used together, human clinical research20,21,22,23,24,25 has shown that supplementation:

Folic Acid and Vitamin B12
Folic acid and vitamin B12 are both critical B vitamins that perform a variety of functions in the human body. Among those functions are the roles they play in cognitive performance. For example, in one study26 older adults were supplemented with 400 mcg of folic acid and 100 mcg of vitamin B12 daily. The results showed that this combination:

What to Expect When Taking Ageless Memory
It should be noted that the aforementioned nutraceuticals tend to provide their effects at different times, so even if you use all of them your results will be progressive rather than instantaneous. Essentially, here’s how it will likely work (although everyone is different and results and timing may differ for you as well): 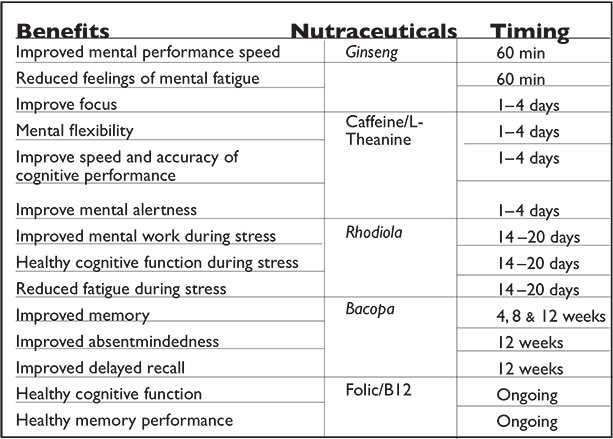