High blood pressure, cholesterol and oxidative damage to blood vessel walls are a few cardiovascular disease risk factors. There is no warning for high blood pressure, which can lead to a heart attack, without regular checkups. It is a silent killer. Elevated cholesterol and plaque; and oxidative damage in the arteries can take a long time to develop before a heart attack occurs. Most Americans have no perception of what oxidative damage is and that it causes blockage in blood vessel walls. For this reason, it is essential Americans do all they can to keep the cardiovascular system healthy. Many Americans are told by their physicians they have high cholesterol and LDLfs (low density lipoprotein), which is considered to be "bad cholesterol." These are common biomarkers for cardiovascular disease and blood vessel wall blockage.

Some other signs of coronary artery disease include angina (chest pain), irregular or fast heartbeats, and shortness of breath, dizziness and weakness. Physicians also look at triglycerides and HDLs (high density lipoprotein), but one thing that is often overlooked is inflammation in blood vessels, which is becoming a major concern in cardiovascular disease. LDL is a dangerous risk factor, but oxidized LDL is much worse because it triggers inflammation in the arterial walls. The arteries carry blood, oxygen and nutrients to the heart, brain and all tissues of the body.

Oxidized LDL (OxLDL) is low density lipoprotein, which have been attacked by free radicals as they travel into artery walls. OxLDL has become a major concern in cardiovascular research with regard to its major role in increasing the risk for developing cardiovascular disease.

OxLDL is not only used to help determine cardiovascular disease risk, but also researchers are looking at its negative effect on abdominal obesity and other health problems. It is the oxidative damage to the circulating LDLfs that is a major problem, and in the future, blood tests will be used routinely to measure OxLDL.

There is a distortion in our Western culture with regard to eating habits with the overabundance of food, the wide variety to select from, and lack of control that leads to obesity and disease. Also, many Americans like to eat, but not exercise. Eating healthy and engaging in aerobic exercise can prevent high blood cholesterol and high blood pressure. Choosing a healthy lifestyle can significantly reduce onefs risk for developing cardiovascular disease. OxLDL levels are higher in those who smoke, have a diet high in trans-fats, and do not manage diabetes properly.

Diet and exercise are extremely important, but there are dietary ingredients such as ARTINIA. that are potentially beneficial. It is an up and coming new vegetarian supplement, and part of the new nutritional frontier positioned to significantly reduce OxLDL along with plaque formation in the arterial walls.

WHAT IS ARTINIA?
Many consumers might be familiar with chitin, and/or ƒÀ-Glucans. ARTINIA is a unique, gluten-free and naturally produced chitin-glucan made up of key compounds, including chitin (poly-N-acetyl-D-glucosamine) and β-(1,3)-D-glucan. It is extracted from a vegetarian source, Aspergillus niger (A.niger) and is an insoluble fiber, although it has both soluble and insoluble fiber benefits.

ARTINIA has been shown to protect against oxidative damage in humans and animals, especially within the cardiovascular system. This protection has been associated with reduced OxLDL, increased antioxidant enzymes, a diminished inflammatory response within the arterial walls, and significant reduction in the formation of arterial plaque.

OxLDLfS PATHWAY TO DESTROY
The American Heart Association defines atherosclerosis as a process whereby deposits of fatty substances, cholesterol, and other substances build up in the inner lining of arteries. Since the 1970fs, research suggests that atherosclerosis is caused by an injury to endothelial cells found in blood vessel walls. The injury leads to problems with endothelial cell function. Researchers have shown itfs the OxLDLfs effect on the endothelium that causes the first injury in blood vessels that leads to fatty streak formation and eventually the atherosclerotic plaque. A fatty streak is the initial stages of atherosclerosis where fat is deposited within the inner walls of the blood vessels. Research shows ARTINIA helps decrease OxLDL and reduces fatty streak formation.

When LDL becomes oxidized, it travels through the arteries that have an inner-lining called endothelium. These arteries include the coronary arteries, the carotid artery, and arteries that carry blood to the rest of the body. As LDL becomes oxidized it increases the number of inflammatory cells like macrophages and platelets that congregate at the damaged blood vessel site and stick to the damaged tissue. It is like a snowball effect where the macrophages, cholesterol, platelets and other types of fat accumulate causing the plaque to increase in size and cause blockage. The beneficial effects of ARTINIA are it helps to keep the blood vessels clear so nutrients and oxygen can flow through blood vessels to the tissues.

In the body, free radicals have a great affinity to target lipids such as LDL within artery walls causing oxidative damage. The body has the ability to fight oxidative stress through a defense system using antioxidant enzymes such as superoxide dismutase (SOD) and glutathione peroxidase (GPX). SOD and GPX are liver enzymes, which help to lower the amount of free radicals in the liver to help prevent the disabling disease caused by aging. Many Americans do not exercise on a regular basis, and/or have poor nutrition, which increase the risk of damage to LDL.

ARTINIA offers antioxidant benefits and protection against oxidation in blood vessel walls to protect the arteries.

ARTINIA helps to increase the activity of superoxide dismutase (SOD) and glutathione peroxidase (GPX), major antioxidant enzymes, and reduces other reactive molecules that damage tissues. The antioxidant effect of ARTINIA in animals was demonstrated in a 12-week study, and was confirmed in a subsequent human study.

ARTINIA RESEARCH
A 12-week study was performed with animals that consumed a high-fat diet to induce fatty streak formation and atherosclerosis within the aortic blood vessel wall. This particular animal model is very similar to atherosclerosis that occurs in humans. The results showed there was a significant improvement in the groups taking ARTINIA compared to the control group receiving the high-fat diet with ARTINIA. ARTINIA lowered triglyceride levels by about 39 percent, and significantly lowered the aortic fatty streak formation by about 96 percent compared to the group on the control diet.

HUMAN RESEARCH
The Hospital Center of University of Liege Diabetology, Nutrition and Metabolic Diseases Department in Belgium performed a four-week study with men who were slightly overweight and had moderately high cholesterol levels. The study was done to confirm the benefits and safety shown in animals. After four weeks, ARTINIA was shown to reduce OxLDL compared to baseline levels by 26 percent. 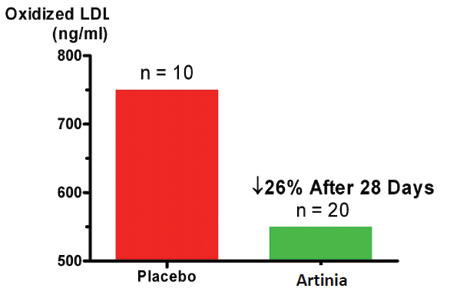 ARTINIA reduced oxidized glutathione by 20 percent and increased the ratio of reduced to oxidized glutathione by 9 percent, which is very beneficial to the body. This validated the significant increase in antioxidant enzyme activity that was previously shown in the animal research. The antioxidant benefits observed in animals in 12 weeks occurred in humans four weeks after the intake of ARTINIA.

Another human study using ARTINIA has, in a randomized, double-blind, placebo-controlled, multi-center study in North America, recently been completed. The purpose of this study was to confirm the benefits of ARTINIA for cardiovascular health and oxidative balance.

Other animal research has also been done with ARTINIA and has reported the benefits it has on the “friendly flora in the gastrointestinal tract, which provides support to the immune system. Animals were provided a high fat diet and there were significant reductions in weight gain, fat mass development, fasting hyperglycemia, glucose intolerance, liver triglyceride accumulation and high cholesterol levels.

ARTINIA SAFETY
ARTINIA has been judged to be safe according to a major regulatory authority in the European Union and by experts in the U.S. In addition, it has also been approved as being safe having GRAS (Generally Regarded As Safe) status so it can be used in food. It has both acute and chronic toxicity studies performed demonstrating its safety.

Note by the author:
It is important when I formulate products to use ingredients that have research to demonstrate they are not only effective, but have good safety data. Although many consumers have not heard of OxLDL, formulators need to be looking ahead at what researchers are finding to be the optimal markers for disease risk and determining what can reduce those risks. ARTINIA is a cutting-edge ingredient with the future in mind to support the critically important blood vessels that keep us alive and enjoying life.

Judi holds a Master's Degree in Dietetics and Exercise Physiology. She was in private practice , as a clinical nutritionist for 12 years in Colorado, including 2 1/2 years for the University of Colorado - Boulder's Human Performance Lab.


She presently operates as a technical consultant for companies in the dietary supplement industry. She performs exhaustive literature reviews on dietary supplements, writes third party scientific reports, formulates products, writes structure/function, gives scientific and educational presentations and investigates opportunities for new and unique ingredients. She has been appointed as a scientist for the AMC Cancer Center in Denver, Colorado, supporting their nutrition research. She also writes nutrition articles for magazines, completed the book New Nutrients Against Cancer and a second with Dr. Tom Slaga on Calcium D-Glucarate. She currently speaks on various nutrition topics on Channel 29 (FOX) News in Florida every week and regularly on radio programs.