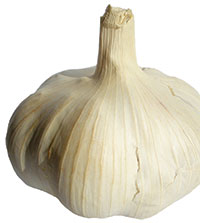 Heart disease is the leading cause of death for both men and women, with approximately 600,000 deaths a year, in the USA, according to the Center for Disease Control (CDC).

Epidemiological studies and randomized clinical trials provide evidence that coronary disease is largely preventable. While medical interventions, such as statin treatment, help in primary prevention for some patients, the main emphasis in prevention is by maintaining a lifestyle that includes exercise and a diet high in plant food, including garlic (Allium sativum), that for centuries has served in traditional medicine as a remedy against disease and now proven by modern medicine to have disease preventive effects. Fresh garlic, however, is not for everyone; its pungent odor that lingers on breath and skin and its potential to cause adverse gastrointestinal effects, including flatulence, prompt many to shun the herb, depriving them of its protective effects.

Aged Garlic Extract
The solution to obtaining the health benefits of fresh garlic and none of its unpleasant side effects is achieved by adding Kyolic Aged Garlic Extract (AGE) to the daily diet. AGE is a natural odorless supplement, made by Wakunaga of America, from organic fresh garlic that is extracted and aged at room temperature, for as long as 20 months. AGE, is rich in organosulfur compounds with powerful antioxidant activity, that protect the cardiovascular system against damaging oxidative stress and atherosclerotic plaques, thus lowering the risk of heart attacks as well as stroke. These organosulfur components include high levels of stable water-soluble S-allylcysteine that is used in standardization and S-allylmercaptocysteine that is unique to AGE. Other antioxidants in AGE include some lipid soluble organosulfur compounds, fructosyl arginine, allixin, saponins and small amounts of selenium. AGE has a high 98 percent bioavailability, as research shows. The extraction and aging process, in the manufacturing of AGE, converts harsh unstable components such as volatile allicin, to stable compounds, further increasing the antioxidant content of AGE.

With well over 700 articles in peer-reviewed journals, showing health benefits, often greater than those of fresh garlic, AGE is the choice garlic preparation in research and clinical trials that study the protective properties of this unique herb, in lowering the risk of heart disease and other pathological conditions, including cancer and Alzheimer’s disease. Studies with garlic preparations other than AGE have reported conflicting results on cardiovascular protection, in part due to the fact that various commercial forms of garlic, some containing unstable compounds and prepared in different ways, are hard to standardize; raw garlic varies in composition from batch to batch, limiting standardization. By contrast, Kyolic AGE that is highly standardized by stable water-soluble S-allylcysteine, has consistently proven its potential to provide cardiovascular protection.

S-allylcysteine, the major water soluble organosulfur compound in AGE, was shown to lower cholesterol by inactivating an enzyme involved in the production of cholesterol, by 41 percent. In a study where patients with heart disease were taking statins to reduce cholesterol levels the effects of AGE in lowering cholesterol synthesis was additive with statins. Other protective effects of AGE on the heart are increasing blood flow and microcirculation and protecting endothelial cells that line blood vessels from oxidative injury, a factor of great importance in diabetes, where the microvasculature is damaged. AGE has been found to increase, by as much as 30–40 percent, the synthesis of nitric oxide (NO), a regulator of blood pressure, relaxing blood vessels and helping reduce blood pressure and prevent hypertension that is a major risk factor in heart disease. Breakthrough double-blind randomized clinical trials by Dr. M. Budoff and colleagues, at the University of California in Los Angeles, have shown that AGE inhibits the progression of coronary-artery calcification and plaque formation, thereby dramatically reducing the risk of a heart attack (myocardial infarct).

Lowering Blood Pressure
Hypertension effects about 30 percent of adults worldwide. A study by Reid and colleagues set out in a double-blinded randomized placebo-controlled trial, to assess in a 12-week study, the potential of AGE, given at different doses, to serve as an adjunct treatment to antihypertensive medication, in patients with uncontrolled hypertension.

Participants in the study were 79 patients with uncontrolled systolic hypertension. Participants were allocated to one of three groups receiving either of one, two or four capsules daily of Aged Garlic Extract (240/480/960 mg containing 0.6/1.2/2.4 mg of S-allylcysteine), or placebo. Blood pressure was assessed at 4, 8 and 12 weeks and compared with baseline.

The trial showed that AGE is an effective treatment in uncontrolled hypertension, acting in a dose related manner and superior to placebo; the investigators conclude that AGE could be considered as an adjunct, safe treatment to conventional antihypertensive therapy.

Preventing Coronary Plaques
Calcium deposition in coronary artery walls is an early feature of atherosclerotic plaque formation, with a direct correlation between the amount of calcium and the degree of atherosclerosis. Coronary artery calcium, measured by electron beam computed tomography, has strong predictive value for the incident heart disease.

A double-blind placebo-controlled randomized trial by Dr. M. Budoff and colleagues, from the University of California (UCLA), investigated the effects of AGE in modulated progression of atherosclerotic plaques, in patients with heart disease, who were on statin therapy. Using computed tomography to measure coronary calcium deposits, as a measure of plaque progression, the investigators found that while patients on placebo showed plaque progression at a rate of 22 percent per year, progression in patients on AGE was reduced to 7.5 percent. As all patients in this study were on statin therapy, improvements by AGE indicated its efficacy as an increment to statins treatment, in reducing the progression of coronary atherosclerosis and lowering the risk of a heart attack.

AGE and Coenzyme Q10 in Heart Health
Coenzyme Q10 (CoQ10) is present in all cellular membranes and has antioxidant properties that, similar to AGE, scavenges free radicals and prevents the oxidative modification of LDL, a step that promotes atherosclerosis. CoQ10 is lower in patients with coronary artery disease, adding a coronary risk factor. Both AGE and CoQ10 help reduce multiple cardiovascular risk factors. A recent randomized placebo-controlled, double-blinded trial, from the group headed by Dr. M. Budoff, at UCLA, was designed to assess the combined effect of a commercially available AGE and CoQ10 supplement (Kyolic 110, Wakunaga of America) on coronary atherosclerosis plaque burden and inflammatory biomarkers, in a group of firefighters.

In this trial, 65 intermediate risk firefighters (age 55 ± 6 years) were treated with a placebo capsule or capsules containing AGE and CoQ10 (total daily AGE+CoQ10, 1200 and 120 mg, respectively) for one year. All participants underwent coronary artery calcium scanning and C-reactive protein, the measure for inflammation, at baseline and at 12 months.

After 12 months, the AGE+Q10 group showed a significantly lower coronary artery calcium progression compared to placebo (the calcium score was 32 ± 6 for AGE/ CoQ10 vs. 58 ± 8, for placebo P = 0.01). Similarly, C-reactive proteins, the markers for inflammation, were significantly decreased in AGE+CoQ10, compared with placebo (-0.12 ± 0.24 for AGE/CoQ10 versus - 0.91 ± 0.56 mg/L, for placebo P < 0.05). After adjusting for a variety of variables, including age, gender, conventional cardiac risk factors, and statin therapy, AGE+CoQ10 was associated with a 3.99 fold lack of calcification progression, compared with the placebo.

Bottom Line
Heart disease is the leading cause of death among men and women in the USA. It is a multifactorial disease with many risk factors but, other than the modulating risk factor of inherited susceptibility, it is preventable. As free radical oxidation plays a role in the development of heart disease, antioxidant activity offers protection. Kyolic Aged Garlic Extract (AGE) is a natural and odor free garlic supplement, made of organic garlic by Wakunaga of America and highly standardized and bioavailable. AGE is rich in antioxidant organosulfur compounds and proven to have a wide range of disease preventive effects. Evidence from clinical trials, described above, shows that AGE protects against a wide range of cardiovascular risk factors. Both pre-clinical and clinical studies show that a daily intake of AGE plays an important role in preventing and delaying heart disease, notably dramatically lowering the risk of heart attacks.