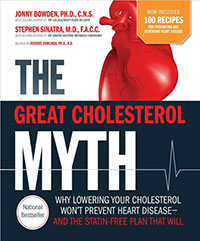 For decades, government health agencies and the long-arm of the pharmaceutical industry’s PR machine have inundated the public about the horrors of high cholesterol and saturated fat. Cholesterol and fat have been tarred and feathered as the perpetrators of heart disease.

I strongly differ with the establishment message and in my newest book, The Great Cholesterol Myth: Why Lowering Your Cholesterol Won’t Prevent Heart Disease and the Statin-Free Plan That Will (Fair Winds Press), I explain how you have been misled. The book, co-authored with well-known nutritional expert Jonny Bowden, PhD, is packed with powerful research, expert opinions, and combined clinical experience that paints a whole different picture.

We wrote the book to counteract establishment propaganda that long ago slid off the tracks in a distorted pursuit of cholesterol and saturated fat bashing. We strongly believe the public has been totally misled, misinformed, and in some cases, directly lied to about cholesterol. We believe a conspiratorial combination of misinformation, scientifically-questionable studies, corporate greed, and deceptive marketing has created one of the most enduring and damaging myths in medical history: that cholesterol causes heart disease. Many, many millions of marketing dollars keep this myth alive year-after-year, keep the public obsession fixed on a relatively-minor participant in the heart disease process, and generate nearly $30 billion annually in sales for cholesterol-lowering pharmaceuticals. The real tragedy is that the attention on cholesterol leaves the real causes of heart disease largely ignored: inflammation, oxidation, sugar, and stress.

In the book, Jonny explains how, at the beginning of his career, which started as a personal trainer for a major New York City health club, he had vigorously promoted the low-fat mantra to his clients. Yet he soon found that clients did better on diets with ample fat, a conclusion I similarly reached in my own clinical experience and research. We both read some of the same studies that put additional doubts into our minds and independently led us to believe that most cardiovascular problems had nothing to do with lowering cholesterol.

Over the years we both learned from Mary Enig, PhD, a leading lipid biochemist, that there was little to fear from saturated fats in the diet. The real fat felon in the diet, she has correctly identified, is trans fat, a processed unsaturated fat that potently raises the risk of heart disease. Trans fats are inflammatory, and found commonly in fried and snack foods, baked goods, and frozen dinners. You’re likely familiar with the term hydrogenated oil on many foods labels. That’s a trans fat and should be avoided.

Jonny, like me, looked for strategies that seemed to work for the healthiest, longest-living people on earth. We both found that lowering cholesterol has almost nothing to do with reducing heart disease, and definitely nothing to do with extending life. Only a tiny minority of patients live longer by taking cholesterol drugs, another fact unfortunately lost on the multitude of mainstream doctors prescribing them at record-setting levels. In the book we quote one of the world’s foremost cholesterol debunkers, Swedish researcher Uffe Ravnskov, MD, PhD, “People with high cholesterol live the longest. This statement seems so incredible that it takes a long time to clear one’s brainwashed mind to fully understand its importance.”

The introduction to our book was written by Michael and Mary Eades, both medical doctors who authored Protein Power and other important diet books. They bemoan the sad fact that tens of thousands of doctors today succumb to “group think” to treat a non-existent disease—elevated cholesterol—with drugs that are far from benign. It’s similar, they say, to the nonsensical pursuit of healing in the past with leeches and bloodletting.

“Unfortunately, the vast majority of laymen have been bombarded with so much misinformation about cholesterol that most take it as a given that cholesterol is bad and that the less they have the better,” they write. “Nothing could be further from the truth. Cholesterol is an essential molecule without which there would be no life, and so important that virtually every cell in the body is capable of synthesizing it.” That’s so, so true. Cholesterol is an essential raw material for healthy cell membranes, bile acids, and vitamin D conversion in the body. Your steroid hormones (including sex hormones) are made from cholesterol. Your body makes cholesterol because it needs it.

Our book is a search for the truth, and I am confident that we found it. We cite major scientific research routinely ignored by the medical system, such as a recent study showing that almost half of nearly 140,000 patients admitted to hospitals for heart disease had LDL cholesterol levels under 100 mg/dl (the current mainstream therapeutic target for LDL). You would think such a result would cause some reflection. It didn’t. Instead, the researchers concluded that maybe an even lower target is needed. Such is the reigning insanity that we hope to counteract with our book. Another inconvenient fact is that a level of 160 mg/dL or less, has been linked to depression, aggression, cerebral hemorrhages, and loss of sex drive!

Our book has started to make ripples. We have appeared on the most popular national TV and radio health shows, and the response has been overwhelmingly positive. We’re spreading the word and trying to bury an entrenched myth.

In our myth-busting book you will learn many things that your doctor may not tell you or even know:

Dr. Sinatra is a board-certified cardiologist and certified bioenergetics analyst who also uses complementary nutritional and psychological therapies at his New England Heart Center in Manchester, CT. He is the author of Lose to Win: A Cardiologist’s Guide to Weight Loss, Optimum Health, The CoenzymeQ10 Phenomenon and, Heart Sense for Women, published by LifeLine Press.