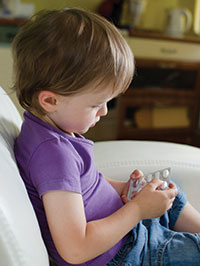 The Centers for Disease Control and Prevention (CDC) estimates that approximately six percent of Americans suffer from asthma. This is a surprisingly high figure and it is on the rise. It is surprisingly high in part because asthma is one of a number of health conditions that can be present, yet unrecognized, in both children and adults. Yet being out of sight is not the same as being benign. Nearly 500,000 Americans are hospitalized each year for asthma and more than 5,000 die from it.

Current estimates of asthma rates are almost twice as high as official estimates from only one to two decades ago. Asthma is most common in children below the age of ten and twice as common in boys as in girls. Although there are genetic components to the condition, the environment clearly is involved. For instance, roughly one half of children with asthma come from homes where there are smokers. Similarly, a report in the New York Times (April 19, 2003) indicated that 25.5 percent of the children in a 24-block area in the Harlem neighborhood of New York City have asthma, a rate that is 5 points higher than has been documented anywhere else in the United States.

What is asthma? In common with a number of other conditions, it involves spasms in the airway tubes of the lungs (the bronchial tubes or bronchi), swelling of the lung tissues and the production of thick mucus. Symptoms include shortness of breath (wheezing), chest tightness, chest pain, and even disturbed sleep at night due to breathing difficulties (many attacks occur between 2 AM and 4 AM). As is true of hay fever, allergies often are important in asthma, with typical triggers including pollen, mold, animal dander, dust and tobacco smoke. Non-allergy factors, which act as lung irritants, may also be involved. These can include environmental toxins, viruses, respiratory infections (such as the common cold), cold air, exercise and emotional factors. In certain individuals, even aspirin and other nonsteroidal anti-inflammatories can trigger attacks. A combination of allergenic and non-allergenic factors is the norm in asthma. 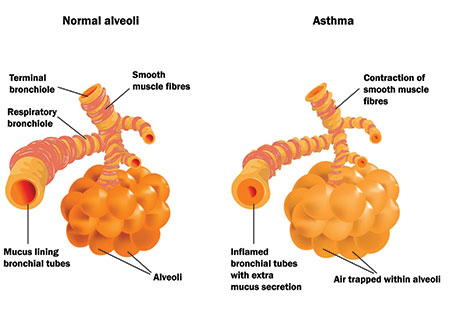 Medical poster showing normal lung alveoli and one in asthma.

Quite a number of food additives are known to be linked to asthma. For instance, sulfites, which are often used to preserve perishable foods and are common in beer and wine, are known triggers. Similarly, tartrazine, which is yellow food dye #5 and is found in many processed foods, even in vitamins and prescription drugs, is another trigger. Food colors can serve as triggers especially in children.

Digestive issues are very often found in asthmatics. Particularly important may be the incomplete digestion of proteins. Evidence for this comes from several different considerations. First, food allergies are common in asthmatics and the usual offenders include eggs, milk, fish, wheat and certain nuts, principally peanuts. Second, at least one study has found lowered gastric acid secretion in about 80 percent of children with asthma. Third, rotation diets (to reduce allergic food reactions) and vegan diets appear to help in a large percentage of cases of asthma. These and other pieces of evidence suggest that poor digestion and the leaky gut syndrome may be important in the etiology of asthma. Inadequate digestion of proteins and the subsequent movement of incompletely digested large molecules across the gut membrane can cause a chronic low-level activation of the immune system and increased levels of inflammation in the body.

Yet another factor in asthma is obesity. Obesity, as is true of poor digestion, is associated with an increase in chronic inflammation throughout the body. Inasmuch as the rate of obesity is increasing in Americans of all ages, it is perhaps not particularly surprising to find that conditions such as asthma, which are linked to chronic inflammation, also are on the rise.

The drugs most prescribed for asthma are corticosteroids and leukotriene modifiers. Both of these classes of drugs are designed in part to reduce levels of inflammation, but may be viewed as treating symptoms rather than causes. Corticosteroids are direct anti-inflammatories. Blocking leukotrienes is an indirect method of achieving the same effect. Leukotrienes, which are components of the immune system and are released by cells in your lungs during an asthma attack, cause the bronchial tubes to become inflamed. It is this inflammation that leads to wheezing, shortness of breath and the production of excessive mucus.

Natural approaches to asthma should be directed toward resolving the body’s excessive response to triggers. Digestive health is a factor here. Other important factors include the health of the intestines and nutrition to calm chronic inflammation and hyper-immune response.

Aside from identifying offending foods, improving digestion can mean changing habits and adding supplements. For instance, eating too much and eating too rapidly or while under emotional stress are known to lead to poor digestion. Similarly, drinking large amounts of milk at meals may not be a good idea inasmuch as the calcium in the milk tends to reduce the stomach’s level of acid through a buffering action. In this regard, interesting tests performed in India showed that pasteurized and homogenized milk is harder to digest than is scalded milk—children consuming the latter grew better and had few allergies than those consuming the former.

Recognizing that our food habits may not change, it is a good idea to be aware of appropriate digestive supplements. Natural digestive aids include the fruits pineapple (for bromelain) and papaya (for papain). Protein digestion can also be supported with betaine hydrochloride taken with meals and pancreatic enzymes taken after meals. Leaky gut syndrome itself may respond over a period of two to three months to supplementation with N-acetyl-glucosamine. The daily use of a good probiotic is another way of improving digestive health.

Chronic inflammation is now almost a way of life in the United States. In part, this is the result of the gross imbalance in the types of essential fatty acids found in the American diet. Because certain grain and seed oils are cheap, food processors use almost entirely what are known as omega-6 fatty acid family oils in food manufacture. These cheap oils include corn and soybean oils. Unfortunately, on diets high in simple carbohydrates (the American diet gets 25 percent of its calories from added sugars!) and low in minerals, the omega-6 family of oils supports the production of substances that feed inflammation in the body. In contrast to the omega-6 fatty acids, the omega-3 fatty acids, such as are found in flax seed and fish, turn off inflammation. In pre-modern times, the ratio of omega-6 to omega-3 oils in the diet was approximately 3 to 1, whereas today it is between 10 to 1 and 20 to 1. In clinical trials, adding omega-3 fatty acids to the diet has been shown to relieve asthma.

Several other nutrients have been shown to help reduce the frequency and severity of asthma when added to the diet for a period of months. These include the mineral magnesium; the vitamins B6, B12 and C; and plant nutrients, including quercetin and grape seed extract. These are not magic bullets: changes in dietary habits that lead to a naturally rich supply of nutrients as components of food are more likely to promote benefits than is simple supplementation. A relatively balanced medical review of these points can be found in “Dietary supplements and asthma: another one bites the dust.” (Thorax. 2007 June; 62(6): 466–68.) The take-home message from that article is a better diet that includes lots of fresh whole fruit and vegetables, but much reduced amounts of refined foods, is the first place to start.

Greater rates of physical activity and sufficient sunlight to insure adequate vitamin D are some other simple measures linked to improved lung function. As is often the case in autoimmune conditions, the simple supplementation of vitamin D is not nearly as effective as engaging in those activities that naturally are linked to improved blood vitamin D levels. Moderate sun exposure activates molecules and pathways in the body beyond those of vitamin D and this complete package, as it were, has been shown to be important for health.1

The most promising herbal supplements for asthma are extracts of Boswellia serrata 2 3 4, Curcuma longa and licorice (Glycyrrhiza)5 as well as the sources of proanthocyanidins known as Pycnogenol6.

Finally, N-acetyl-cysteine (NAC) may offer some benefit. NAC helps to thin the mucosal secretions, which makes it potentially useful in asthma, bronchitis and other respiratory disorders.7 The daily intake of NAC probably should not exceed 1,200 mg even in adults except under special conditions, which is to say that more is not necessarily better. However, several trials have shown that much less than this amount is required for results. A study of chronic bronchitis giving NAC at the rate of only 200 mg twice per day found good results within three months, with benefits still improving at six months at the termination of the study. Therefore, supplementing with 200 –400 mg of NAC twice per day for a several month trial may be a good starting point for individuals suffering from asthma.

For references link to: http://totalhealthmagazine.com/references/september2012.pdf