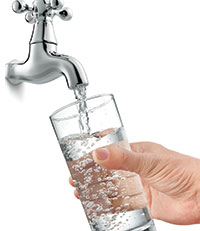 Name a drink that can increase your alertness, prevent you from fainting after giving blood, and even promote a teensy bit of weight loss.

Think it’s one of those “miraculous” multi-level marketing elixirs made of exotic juices that sell for about 40 bucks a pop?

The drink I’m talking about doesn’t cost anything, yet most of us don’t get enough of it.

Researchers at Vanderbilt University Medical Center led by David Robertson, MD, have shown that ordinary water—without any additives—does more than just quench thirst. It has some other unexpected, physiological effects. It increases the activity of the sympathetic—fight or flight—nervous system, which raises alertness, blood pressure and energy expenditure (a technical term for calorie burning).

Sharp eyed readers may have noticed the reference to increasing blood pressure, something none of us want to do (unless we have very low blood pressure to begin with). But not to worry, while the researchers found that water did not significantly raise blood pressure in healthy young subjects, they did find that water increased sympathetic nervous system activity.

So how much weight loss are we talking about?
Dr. Robertson calculated that it might be as much as five pounds a year if you drank three 16 ounce glasses of water a day and nothing else changed.

“This is not going to be the answer to the weight problem in the United States,” he said, “but it’s interesting that activation of the sympathetic system is enough to do that.”