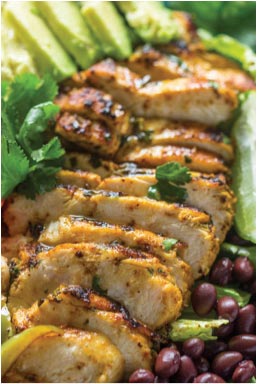 Historical Perspective: Chicken is the most common type of poultry in the world—having been domesticated and consumed as food for thousands of years. There are many varieties of chicken, including free-range chicken, organic chicken, and conventional chicken; the difference is on the basis of their breeding. While free-range chicken, as the term implies, is allowed to roam freely in the pastures; conventional chicken, which is also the most controversial, is kept in cages and not allowed to move freely. Conventional chicken is injected with hormones to fasten its growth and make it unnaturally big—this chicken variety is usually kept in unhygienic and unhealthy conditions, thereby, the necessity of also using antibiotics.

Of the three, organic chicken is the most expensive because it is bred freely and allowed to eat only organically prepared food, as per the USDA standards. It is kept in healthy and clean conditions and is allowed to grow naturally without any medications to disturb its hormone cycle. Organic chickens are also vaccinated and therefore safe to eat.

High Protein Content — chicken breast, with 31 grams of protein per 100 grams, is one of the best foods for protein. Protein plays an important role in our diet — made of amino acids, which are the building blocks of our muscles.

Rich in Vitamins & Minerals — it is not only a good source of protein but also very rich in vitamins and minerals. For example, B vitamins in it are useful for preventing cataracts and skin disorders, boosting immunity, eliminating weakness, regulating digestion, and improving the nervous system. They are also helpful in preventing migraine, heart disorders, gray hair, high cholesterol, and diabetes.

Vitamin D in chicken helps in calcium absorption and bone strengthening. Vitamin A helps in building eyesight, and minerals such as iron are helpful in hemoglobin formation, muscle activity, and eliminating anemia. Potassium and sodium are electrolytes; phosphorus is helpful in tackling weakness, bone health, brain function, dental care, and metabolic issues. Weight Loss — diets with high levels of protein have been known to be effective in reducing weight, and chicken has been one of the main contenders in weight loss. Studies and trials have shown that significant weight control was observed in people who regularly ate chicken breast—attributed to its high protein content and low calories.

Control of Blood Pressure — chicken consumption has been found to be useful in controlling blood pressure. This was observed in people with hypertension and in many African Americans, though the diet was also comprised of nuts, low-fat dietary products, vegetables, and fruits.

Anticancer Properties — studies found that in non-vegetarians, higher consumption of red meat, pork/ham increased the risk of colorectal cancer, while in chicken and fish eaters, the risk of developing this cancer in later life was reduced. It is also touted to help reduce the risk of colon cancer.

Reduced Cholesterol — the amount of saturated fat and cholesterol found in red meat such as beef, pork, and lamb are much higher than the levels found in chicken, fish, and vegetables. Therefore, wholistic rejuvenation principles advise consuming chicken or fish instead of red meat for a lowered risk of cholesterol and subsequent heart disease development.

Treatment of Common Cold — consuming warm chicken soup has been touted for centuries as a great remedy that provides relief from the common cold, including symptoms of a congested nose and sore throat.

Cilantro is a popular herb consumed around the globe — resembling flat leaf parsley at first glance, but at first sniff, transports you to the exotic flavors of the Mediterranean, Mexico, Asia, and India.

Cilantro adds a fresh boost of flavor used in everything from guacamole and salsa, to curries, noodle dishes, hearty soups, tacos and chimichurri sauces of Argentina. Not only does this flavorful, bright green herb have unlimited culinary applications, but surprisingly to many people, cilantro is health-enhancing and has many known healing properties.

One of the reasons cilantro is so unique is due to its versatility. While green and leafy, it brings a fresh, citrus-like flavor to foods. Once it flowers, it produces seeds, the flavor of the leaves intensifies, plus the coriander seeds that it yields contain their own health benefits. While still citrusy in nature, coriander has a warm, almost nutty flavor, making it the perfect complement for pickling, sausages, breads, and is one of the main spices in Garam Masala, the spice blend widely used in Indian cooking, with variations that are as distinctive as the handed-down family recipes generation-to-generation.

1. Helps Rid the Body of Heavy Metals — these toxic metals accumulate in our tissues leading to heart disease, hormonal imbalances, neurological disorders, thyroid disorders, infertility, and too many other diseases to name in this context. Cilantro has shown to bind these toxic metals and loosen them from the tissue — facilitating their elimination from the body.

2. Protects Against Oxidative Stress — linked to a wide scope of degenerative diseases including some cancers, heart disease, arthritis/fibromyalgia, Alzheimer’s disease, macular degeneration, and much more.

3. Lowers Anxiety/Panic Disorders and Improve Sleep — benefits your sleep cycle via its natural sedative effects. A recent study published in the Indian Journal of Pharmacology found that high levels of cilantro extract produce the same levels of anti-anxiety effects as the popular prescription drug, Valium (diazepam).

4. Lowers Blood Sugar Levels — cilantro’s leaves and stems help lower blood sugar levels in animal studies. The most significant study published in the Journal of Food Sciences showed that when diabetes has been diagnosed, cilantro helps support healthy liver function, thus helping to balance blood sugar. Researchers believe that the results support Coriandrum sativum (cilantro) used in cooking would, in fact, be a remedy for diabetes. Chop cilantro’s leaves coarsely, and chop the stems finely, and add to salads, salsas, and smoothies to lower your blood sugar levels and improve overall health. 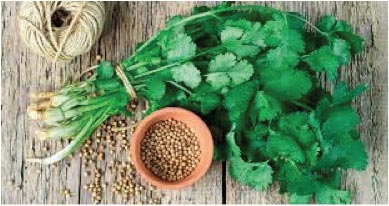 5. Reduces Cholesterol and Triglycerides — in the same study referenced above regarding diabetes, researchers indicated that cilantro lowered total cholesterol and triglycerides in the body. Another study published in Food and Chemical Toxicology found that cilantro’s rich polyphenolic content and natural cardioprotective nutrients are responsible with preventing the oxidative damage that is specifically associated with cardiac damage and is able to prevent myocardial infarctions. Lowering blood pressure, reducing cholesterol, and protecting against damage associated with cardiac impairment — easy to see why we should all include more cilantro.

6. Prevents Urinary Tract Infections (UTI’s) — that may be caused by E. coli, staphylococcus bacteria, sexual activity, genetics, or diabetes. Cilantro’s antibacterial compounds help to keep the urinary tract healthy, and free from unhealthy bacteria in a healthy alkaline environment. In addition to cilantro, coriander seeds are helpful in relieving symptoms, if a UTI does occur.

7. Settles Digestive Distress — cilantro has been used throughout the world for thousands of years to settle nauseous tummies, prevent gas and bloating, relieve indigestion and heartburn, and ease stomach cramps. It aids in efficient digestion, by helping to produce digestive enzymes that aid in the breakdown of foods. In many cuisines, fresh cilantro accompanies hot and spicy dishes because of its cooling effects. If gas or bloating is a problem, try adding chopped cilantro as a garnish for legume dishes, and to salads. Simply soak 1½ teaspoons of dried coriander seeds overnight in two cups of water. Strain and drink, or just add to your morning smoothie. It will help relieve the discomfort and pain associated with the UTI and helps to speed your healing.

8. Protects Against Food Poisoning — benefits not only detoxifying the body but also protects it from infection and toxins. Its natural antibacterial properties help to protect against both food and water-borne diseases including food poisoning, dysentery, salmonella, cholera, and particularly listeria. Research published in the International Journal of Food Microbiology studied dill, coriander, eucalyptus, and found that cilantro was particularly effective in fighting listeria.

11. Protects Against Colon Cancer — researchers believe that coriander can protect against colon cancer by reducing cholesterol levels, and increasing the excretion of sterol compounds and bile. This process decreases toxic levels in the colon, lowering the risk for cancer.

12. Soothes Skin Irritations — cilantro is used both internally and externally as a remedy for skin irritations including hives, sunburns, and poison ivy. Its natural antihistamines helps to calm the immune system response against allergens. Fresh cilantro blended with coconut oil can be blended together and applied topically to soothe sunburns, dry skin, poison ivy, and hives caused by an allergic reaction. To get cilantro’s full benefits, instead of blending with coconut oil, blend with water, and strain.

This very saucy chicken is my twist on a Mediterranean favorite I enjoyed while in Istanbul, Turkey — minus the hot chilies of course! It contains a very special sauce that can be made with its simply rich au jus or made creamy with the addition of Greek yogurt, sour cream or heavy cream. Try it both ways.

The au jus is like “liquid gold” and delicious served over cooked quinoa or a bowl of steamed spinach.

I specifically like it made with chicken thighs but can be made with any chicken parts.

Optional Add-in: 1/2 cup heavy cream, half and half, sour cream or Greek yogurt

Dr. Gloria’s Kitchen Notes:
If you plan ahead, make the sauce in your blender/food processor, cook it and use half to marinade your chicken overnight and refrigerate the other half. Then brown the chicken as directed without the marinade portion of sauce. This will tenderize the meat and add a rich deep flavor. Then continue with instructions using the rest of the sauce or cream addition.