Sometimes lost in the public service messages regarding what to eat is another important component in nutrition—how food is cooked. This is the take home message from a recent article published in Food Chemistry.1 Moreover, it seems that cooking techniques and materials can cut both ways, either depleting nutrients or enhancing them. Studies have shown, for instance, that using poor quality fats to deep fry fish containing high levels of omega-3 fatty acids can reduce the content of the beneficial omega-3 nutrients. The Food Chemistry study shows that the opposite also can happen, that deep-frying vegetables in extra virgin olive oil can improve nutritional quality.

There are other reasons cooking can be both friend and foe of nutrition. Over-cooking can destroy nutrients because of heat and oxidation, cause them to be tossed out with cooking water, and so forth. In contrast, cooking can make available compounds that otherwise digestion normally cannot extract from raw food. In this particular case, it was found that frying in extra virgin olive oil transferred to vegetables polyphenols from the oil and thereby improved the antioxidant capacity of the vegetables in comparison with either raw or boiled alternatives. The particular new healthful polyphenols were shown to be from the oil and not found originally in the raw vegetables. The further implication is that frying in oils of lesser quality will lead to vegetables that are not as nutritious as those fried in extra virgin olive oil.

Frying with Extra Virgin Olive Oil for Extra Nutrition
Nutrients in raw vegetables often are less bioavailable than is true when the same vegetables are cooked. Likewise, cooking sometimes leads to beneficial transformations of nutrients. The degree to which these claims are true varies from vegetable-to- vegetable and with the cooking method employed. In the present study in Food Chemistry, potato, tomato, eggplant and pumpkin (120 grams each) were deep fried, sautéed and boiled. Extra virgin olive oil was used for the frying and also added to cooking water to create a water/oil mixture; the third cooked arm employed water only. The methods used were typical of standard cooking techniques. Deep fat frying used five parts oil to one part vegetable, whereas sautéing used one half as much oil as vegetable; temperatures were approximately 360 °F and 175–212 °F, respectively. Boiling used five parts water or five parts water/oil to one part vegetable. Cooking lasted 10 minutes; vegetables were drained for an additional five minutes and then refrigerated before being homogenized for testing.

Testing before and after cooking determined fat, moisture, total phenols (or phenolics, referring to the chemical structure of these nutrients), eighteen phenolic compounds and antioxidant capacity. Not surprisingly, deep-frying led to the greatest moisture loss and the greatest gain in fat; sautéing increased fat content less without appreciably changing the moisture content versus the raw state. Depending on the vegetable, boiling either increased moisture or exercised no significant effect; boiling in the water/oil mixture increased vegetable oil content.

Changes in phenolic nutrients were more complex. Deep-frying increased these significantly for all four vegetables by reducing moisture. Sautéing led to nutrient increases in potato and pumpkin, but only non-significant increases in eggplant and tomato. For eggplant, sautéing reduced total endogenous phenolics, primarily chlorgenic acid, apparently because of oxidation from exposure to air due to not being totally covered by the oil. Total phenolics fell in both potato and pumpkin from either method of boiling. Both frying techniques increased phenolic nutrients typical of extra virgin oil indicating a transfer to the vegetables of oleuropein, pinoresinol, hydroxytyrosol, tyrosol, p-coumaric acid and hydroxybenzoic acid. Phenolic nutrients already found in these vegetables, such as chlorogenic acid and rutin, increased except in the eggplant. Interestingly, all the cooking methods conserved or increased antioxidant capacity in the order of deep-frying, sautéing, and then boiling. The best results with either form of boiling required that the cooking water be consumed along with the vegetable.

About that Olive Oil...
Extra virgin olive oil is oil that has undergone the least processing and that retains the highest levels of naturally occurring polyphenols. Extra virgin and virgin olive oils are good sources of antioxidants and other healthful compounds. 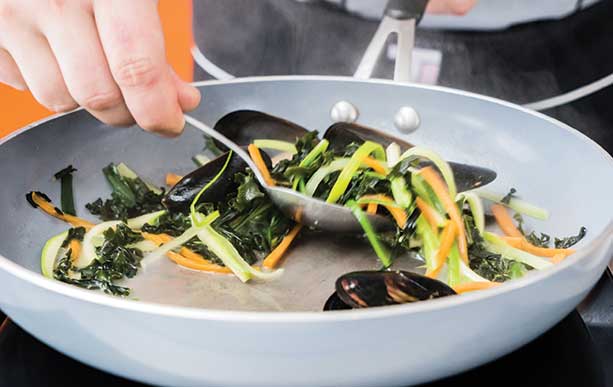 The study in Food Chemistry shows that not all of these healthful compounds are lost in cooking, not even in relatively high-temperature deep-frying. Instead, significant amounts can be transferred to the food being cooked. This is an important finding, in part because it extends the range of uses of olive oil beyond, for example, dressings for salads, and also because it indicates that olive oil is important for more than simply being a source of monounsaturated fatty acids. A quick look at research publications limited even to just 2015 yields papers showing that olive oil polyphenols.

Foods: Raw or Cooked?
As with many such debates, evidence for the raw versus cooked food dispute does not neatly come down to either/ or choices. Are some nutrients damaged or otherwise lost during cooking? Yes, some are. However, as the study above shows, depending on the food, nutrients can become more concentrated and cooking itself can add nutrients. Digestive enzymes are not particularly good at breaking the cell walls found in many vegetables. In these cases, cooking makes much more bioavailable many nutrients. The carotenoids from carrots are good examples of this phenomenon. Again, the lycopene in tomatoes is three or more times more bioavailable from cooked tomatoes, especially when cooked with oil, than from raw tomatoes. Small changes in cooking technique, such as not cooking vegetables in large volumes of water and then tossing the cooking water, can save many vitamins, minerals and other nutrients. A judicious balance of raw and properly cooked foods is more likely to yield a full range of healthful nutrients than is either approach alone.