Something to cackle about

Chicken is the most common type of poultry in the world and Ecuador is no exception. That being said, there is no lack of organic free-range chickens (Pollo de Campo) here in Ecuador.

Chicken has been domesticated and consumed as food for thousands of years. There are many varieties of chicken, including free-range chicken, organic chicken, and conventional chicken - the difference is the basis of their breeding. Let's take a quick look at the differences:

2 tablespoons Italian seasoning or Mix your own*

2-3 cans sour/tart cherries (drained), use fresh cherries when available or**

6 medium slices of Mozzarella cheese (for topping each chicken breast)

Crusty bread, for serving (optional) - I like to serve it on a bed of lightly steamed zucchini noodles.

* Combine equal amounts of dried - rosemary, marjoram, thyme, savory, sage, oregano, and basil - then measure the amount in the recipe. Pulverize to a powder either in a mortar and pestle or in a spice/coffee grinder. If using fresh herbs, you'll have to use about double the quantity in the recipe. NOTE: I make several spice blends in advance and keep in air-tight spice containers or jars to save time. In future issues, I'll share some of my other nightshade-free spice blends.

** You can also use dried tart cherries and reconstitute in water overnight then drain and use as indicated.

High Protein Content
Chicken breast, with 31 grams of protein per 100 grams, is one of the best foods for protein. Protein plays an important role in our diet. It is made of amino acids - the building blocks of our muscles. Generally, the recommended amount of daily protein requirement is 1 gram per 1 kg of body weight or 0.4 g of protein per pound of body weight. For athletes, the daily requirement of protein is about 0.6 g to 0.9 g per pound. For women over 60, it's recommended to consume more to help avoid loss of muscle tone, an example is 0.5 - 0.6 gr of lean protein daily.

Rich in Vitamins & Minerals
Chicken is not only a good source of protein but is also very rich in vitamins and minerals. For example, the B vitamins in it are useful for preventing cataracts and skin disorders, boosting immunity, eliminating weakness, regulating digestion, and improving the nervous system. They are also helpful in preventing migraine, heart disorders, gray hair, high cholesterol, and diabetes.

Weight Loss
Diets with high levels of quality protein have been known to be effective in reducing weight - chicken has been one of the main contenders in weight loss. Studies and trials show that significant weight control was observed in people who regularly ate chicken, particularly the breast - attributed to its high protein content and low calories.

Control of Blood Pressure
Chicken consumption has been found to be useful in controlling blood pressure as well. This was observed in people with hypertension and in many African Americans, though the diet was also comprised of nuts, low-fat dietary products, vegetables, and fruits.

Reduced Cancer Risk
Studies show that in non-vegetarians, higher consumption of red meat, pork/ham increased the risk of colorectal cancer, while in chicken and fish eaters, the risk of developing this cancer in later life was reduced - assuming the chicken is organic free-range. Chicken is also believed to reduce the risk of colon cancer.

Reduced Cholesterol
The amount of saturated fat and cholesterol found in red meat such as beef, pork, and lamb are much higher than the levels found in chicken, fish, and vegetables. Therefore, the American Heart Association advises consuming chicken or fish instead of red meat for a lowered risk of cholesterol and subsequent heart disease development.

Treatment of Common Cold
Intake of warm chicken soup also provides relief from common cold, including symptoms of a congested nose and sore throat. My Jewish friends know this as "Jewish Penicillin" and I couldn't agree more, it's my go-to if I feel vulnerable, extra tired or when traveling. Here's some perspective that validates why this is so effective for common viruses...AND no, it's not just old-wives-tales. 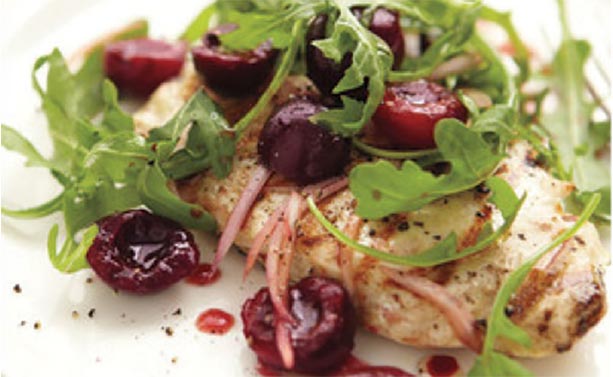 Jewish folklore about chicken soup is closely tied to the central European medical history of chicken soup. The Greek physician Galen, in the second century AD, recommended chicken soup as a cure for migraine, leprosy, constipation, and fever.

A few centuries later, in the Babylonian Talmud, a story refers to the chicken of Rabbi Abba (175-247) that when cooked, served as a general remedy.

Towards the end of the Middle Ages, the Jewish philosopher and physician, Moses Maimonides (1135-1204), recommended chicken soup for the weak and the sick; with great success.

Chicken noodle soup is regarded as a therapeutic dish in several cultures, including Jewish-American and Chinese communities where traditional medicine is practiced.

Although researchers have not been able to determine the cause of the alleged positive effects of chicken soup, several studies have confirmed that it DOES help unblock congested noses and throats.

Chicken is especially rich in a compound called carnosine, and it's this that studies suggest helps reduce that stuffy, congested feeling in your nose and throat. It's thought that carnosine minimizes inflammation in the upper respiratory tract by stopping the migration of white blood cells. Studies show that a hearty bowl of chicken soup may help you clear nasal congestion and have a mild anti-inflammatory effect that can help ease cold symptoms and body aches.

There you have it, one more way to use parts of your chicken, Naturally, From My Kitchen to Yours, Dr. Gloria

Mark April 2019 on your calendar when I'll be able to literally take you by the hand and lead you step-by-step through an entire library of anti-inflammatory meals that are easy to prepare and delicious! Stay tuned!