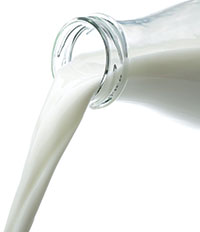 We’ve heard about our school nutrition programs banning sugary beverages because of the immediate need to combat childhood obesity—currently in epidemic proportions in the U.S. That said, there’s a sneaky legal way manufacturers are using to offer reduced-calorie milk drinks like chocolate milk, for example. The ban was placed on added sugar or high fructose corn syrup but wait until you read what the industry is up to!

The claims that labeling like “reduced-calorie,” “reduced-sugar,” “low-calorie” or “diet” are terms that “turn-off” kids and teens has given way to another way of marketing to this demographic. According to FDA regulations, any “non-nutritive” additive in food must be boldly listed on the front label as well as included in the ingredient list. Because non-nutritive additives actually change the composition of the food or drink, the FDA does not allow drinks, for instance, to simply be called “milk” or “chocolate milk,” but must be labeled as “low-calories” or “reduced calorie.”

AND…believe it or not, the dairy industry believes that milk products lower in sugar but sweetened with aspartame is a healthier choice for our kids…REALLY?

How Milk Can Contribute to Obesity
It has been scientifically reported that whole milk can contribute to weight gain, heart disease and even diabetes. It’s also a known fact that removing that fat from whole milk products reduces the flavor…so…hence a perfect opportunity for manufacturers to add artificial sweeteners to low-fat products!

A study from The Physicians for Responsible Medicine (PFRM) reported in Archives of Disease in Childhood that low-fat milk did not lower obesity rates among children. In fact, kids that drank one percent or skim milk were more likely to be overweight or obese than those that drank whole milk!

As if those facts aren’t enough, researchers found that artificial sweeteners can, and usually do, change the chemistry of our brain and the satiation receptors—adding to cravings for sweets and high carb foods that convert to sugar.

When we consume refined sugars or artificial sweeteners, our brains actually believe we’re getting nutrients—we’re not, instead, increased appetite and food cravings are triggered. Our bodies aren’t actually looking for more sweetness, they’re looking for real food; hence the cravings.

You Should Know…
“There was a 41 percent increase in risk of being overweight for EVERY can or bottle of diet soft drink consumed.”

Growing Strong
Parents have been led to believe that milk at school is a must in order to insure strong, healthy bones for growing children. A Harvard study, however, found that drinking milk doesn’t prevent the risk of bone fracture in women and recent studies found drinking milk doesn’t even prevent fractures in adolescent girls. For those reasons, PFRM believes milk should actually be taken off the school menu. On another note, milk fat is what helps the body absorb calcium—stripping the fat and pasteurizing the milk prevents us from adequately absorbing its nutrients, hence the health benefits. This occurs because pasteurization destroys phosphatase—an enzyme we’d normally use to take-up calcium. I don’t believe that pasteurized milk should be labeled as real milk, much less low-fat milk containing aspartame. If we as parents educate ourselves in reading labels and teach our children to eat and appreciate real foods, we won’t have to worry about the food industry trying to sabotage us by attempting to pass-off altered food as real food.

Chemical Cuisine: Do You REALLY Know What You’re Eating? The following are some of the most common (and most dangerous) food additives used today.

Acesulfame K
This brand-new artificial sweetener is 200 times sweeter than sugar. Little research has been done yet but early studies have linked it with certain cancers, migraines, vision disturbances, and thyroid disorders.

Artificial Flavoring
Artificial flavoring can mean that a food or beverage contains any one of 3,000 allowable chemicals, many of which have negative health effects. One of the toxic chemicals that can be legally hidden under this labeling is monosodium glutamate (MSG).

Aspartame (Equal™, NutraSweet™)
Aspartame is 180 times sweeter than sugar. The FDA file of complaints concerning aspartame ingestion includes reports of dizziness, headaches and memory loss. Some studies strongly suggest it is a carcinogen—an Excitotoxin that stimulates brain cells to death.

Benzene
The bottling process of many beverages produces benzene—it is a noted carcinogen linked to heart rate issues, infertility and seizures.

Cyclamates
Cyclamates are among the first artificial sweeteners used in diet drinks. They were once banned by the FDA because of suspicion of their link to cancer but they are once again up for FDA approval!

Saccharin (Sweet n’ Low™)
Saccharin is 300 times sweeter than sugar. The public stopped purchasing products made with the sweetener when they learned of its possible link to cancer. Studies didn’t ‘prove’ this link, so it is once again common in many artificially-sweetened foods. Saccharin is linked, however, to addiction to sweetness, obesity and overeating.

Sucralose (Splenda™)
Sucralose is 600 times sweeter than table sugar and is half refined sugar and half chemical. Sucralose was an accidental discovery— it was originally part of a new insecticide compound…oh great! Chlorinated compounds, such as sucralose, were thought to pass through the body undigested. Recent research, however, found that up to 40 percent of chlorinated compounds become stockpiled in the intestinal tract, soft and connective tissues, kidneys and liver. AND…chlorine has been classified as a carcinogen.

Reversing the Addiction
We can reverse our addiction to unhealthy sweeteners and restore our ability to taste the natural sweetness in whole foods… but…it takes time and commitment to a life-style change. It will seem difficult at first, but I can’t encourage you more strongly to put down the diet sodas and the colored sweetener packets! These chemicals are foreign to our bodies and will not help you achieve any of your health goals. They are actually documented Excitotoxins (they stimulate neurons to death), as eloquently described and researched in a book titled, ExcitoToxins: The Taste that Kills by Dr. Russell Blaylock.

Replace artificial sweeteners (and refined sugars, high fructose corn syrup, etc.) with natural sweeteners like stevia, xylitol (use in small amounts as it may cause some GI symptoms), sweeteners made from LoHan, and small amounts of agave nectar or raw honey. LoHan is my personal favorite—it is a no calorie, natural sweetener from an Asian gourd vegetable that resembles an acorn squash. In my opinion, it has the best taste and aroma as it smells and tastes like granulated maple syrup! You will want to make sure you use a high quality brand that has not been overly processed. LoHan is also a great option for people dealing with diabetes, as it will not spike your blood sugar levels and does not feed health-depleting yeast (Candida). In the long run, your best bet is to limit even these natural sweeteners so that your body’s cravings, food triggers and metabolism are restored to healthy functioning.

The Way I See It…
Our children are our future…help them build upon a strong foundation by educating them not only in real food but in a healthy environment to sustain them and future generations, Naturally.