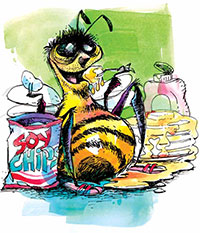 At the National Beekeeping Conferences held in Sacramento this past January one of the topics presented was “Can We Better Serve Our Bees’ Nutritional Needs?” I think the bees’ true nutritional needs have been overlooked for years and are long past due for closer consideration. To deal with the problems that beset the beekeeping community, obviously we need to reexamine our habits, opinions, assumptions and prejudice and take a closer look at where this is heading. Is beekeeping going to continue going down the same road it has been the last few decades or is beekeeping at a point we need to take a serious look at where things have gone astray and search for the remedy?

I think it is imperative to examine what I consider a “man-made belief system” that defies logic. We see “science based” studies and allow them to become our belief system. Science tries to present a stable and final picture of its findings and in the end, it’s only partial, fragmented truth that is always moving. The salesperson makes us think its unchangeable fact.

Ever since I first became involved with beekeeping in 1980, three beekeeping practices have always bothered me: 1) flagrant antibiotic use, 2) pollen substitutes, 3) feeding various syrups to replace honey in the hive.

1) One subject talked about is how the bee does not seem to be as robust as it was 50 years ago. Perhaps some of the bee problems now manifesting are derived from many years of doing quick fixes without any regard to the long-term consequences of our actions. Case in point is the routine treatments with antibiotics (Terramycin®/Oxytetracycline™ and the new kid on the block, Tylan™) that are industry standards. This has probably weakened the bees’ immune systems and strengthened the various organisms we are attempting to combat. When our children are healthy we don’t give them antibiotics “just in case they might get sick.” And yet the quick fix mentality to “prevent a problem” has led to the condition of making antibiotics a constant factor in the hive. Grease patties are the most obvious, but it is true of all hives, if they have been treated, just because the powder disappears doesn’t mean the chemical residues are gone. They linger and accumulate to a much greater extent in the honey, the pollen and the comb than beekeepers may be aware.

As part of my work with bee pollen for international markets we are forced to address the chemical residue considerations that foreign countries monitor, but are ignored in the U.S. market. My research and experience has revealed the alarming extent to which U.S. hives are contaminated. Indeed, antibiotics have become so prevalent in our foods and environment that the FDA now allows them in almost all foods. The milk you drink, the farmed fish, chicken, pork, beef and even some fruits are treated with antibiotics and have “allowable” residues in them. Antibiotics are given to the bees indiscriminately and we are getting them via the food supply. Any wonder these bacteria/ viruses are able to adapt and/or mutate until nothing works against them? The consequences are staggering and they have been sold to us by “the experts.” The bee is less disease resistant now as a result of these erroneous applications.

The pressures to survive in beekeeping are great. Many of us do things because we are scared not to. Like in the antibiotic example above, we go to doctors and take pharmaceuticals for our children’s and our own health/sickness because we are afraid not to. Many times that kind of thinking creates the problems we are trying to avoid. One pharmaceutical leads to another pharmaceutical and on and on. Sometimes it becomes a prescription drug treadmill. Same goes for the beehive. Antibiotic use has its place but, it must be in a measured application not widespread, random use. The treatment of all colonies, even the strong ones, with antibiotics leads to weakening of the colony.

2) Everything about the bee is manipulated, both inside and outside the colony. Once again, the pressures of surviving in beekeeping are great. Many things are done for seemingly practical reasons, one of these is feeding “pollen substitute.” I guess because it is easy to get and it is relatively inexpensive. But is it really?

Bees in one form or another have been around for 80 –100 million maybe even 200 million years as evidenced by the fossilized comb found in the petrified tree trunks in the Arizona Petrified Forest. How long is 1,000,000 years much less 200 million? During this time I am sure the bees overcame countless assaults on their survival and during this time period they were eating pollen. They were able to manage their survival over a long, long time. Now, for some reason, we think we can manipulate their diet by feeding them something they have never eaten before. Bees have never eaten soy or brewer’s yeast or any of the things you find in “pollen substitute.” Could the practicality of pollen substitute be just another weakening event like pesticides, bad air quality, mono pollen sources, chemical treatments inside the colony, etc., that allow some of these other maladies of the bee to get a foothold?

I think bees need to be fed pollen. That is what bees eat. They have determined that for millions of years. We somehow have determined they can and should eat other things. How is this for logic—feed the bees what humans eat. Pass the soy tofu please! The protein content seemed to be a focus, if not the main focus, of the pollen substitute material spoken about at the conference. Beef, nuts, seeds, beans and many more are all protein sources of different types. There are minerals in the dirt but I do not eat dirt because that is not what humans eat for minerals. Bees do not eat soy for protein. They eat protein in the form of pollen. The bees’ bodies will be forced to metabolize the soy or brewer’s yeast somehow—maybe the same way we metabolize the empty foods we eat. These things may help us gain weight too but is that the kind of weight we want to gain? Many examples show pollen substitute does stimulate the colony to get bigger, but I don’t think bigger has anything to do with healthier. Many things are stimulants for short-term but have long-term negative effects. After all, anabolic steroids will make us bigger and improve athletic performance but do we really want to go down a road like that?

You can’t afford not to feed your bees pollen. Doing otherwise could be contributing to the overall weakness of the bee and the colony itself. That weakness could be a contributing factor for all or some of the reasons for Colony Collapse Disorder (CCD). Feeding bees the right pollen is one thing you can control. So much of beekeeping is a situation of being a victim of circumstance whether it is the weather, pesticides, mites, or beetles. The emphasis for the bee research labs should be, by way of pollen, to determine what are good, nutritional bio-diverse pollen plants and what combinations work to make the best nutritional profile. Then beekeepers will have the knowledge for correct supplemental feeding.

Proper nutrition is critical to good health for all living things. You must feed bees what they eat naturally… not what we eat. Couple this with the bee weakened by antibiotics and maybe you can start to explain why some of problems of enormous proportion are happening in the hive. Add the stress of migration and all the other manipulations and you have a prescription for sickness and eventual death.

What affect does feeding pollen substitute have on the nutritional composition of royal jelly? If the bee is weak, and a root cause of colony weakness is lack of good nutrition, then that will have an impact on the quality of the royal jelly also. The bees, the nurse bees, the queen bee, the eggs, the newly emerged bee all become weakened in a nutritionally defective environment. The balance of nature is fragile and trying to manipulate it can have far reaching consequences. Just one event, like deficient nutrition, can have an effect that runs through every process in the beehive.

3) Last but not least, is replacing honey in the hive with various syrups. This is just another weakening event. Bees have eaten nectars and honeys for all this time and now we replace them with another form of sugar? Highly processed and refined sugars that have been heated to extremes, stripped of natural components and in no way resemble anything natural much less comparable to the substantiality of nectar or honey. Why is honey considered healthy and other sugars considered bad for you? Yet we feed the other sugars to the bees and expect good results? Honey substitutes (sugar syrups), go down the same road as the pollen substitutes.

Obviously, the low cost of these syrups comes into play but once again my suggestion is that bees have evolved on honey not some contrived sugar syrup.

If we want to get to the bottom of some of these problems in the beehive we must “get back to the basics” and look at things from there. The present way of doing things is approximately 50 years old. The hives present conditions may be a result of straying from the basics and accepting (without questioning) modern applications that put the bee in harm’s way. The bees are weakened and, because of this, they are attacked from all angles and don’t have the strength to ward off challenges like the stronger, more robust bees of the less manipulated past were able to do. The present strategy is putting out fires (or attempting to) as they arise. Too many problems that were not there before, alongside the problems that were, are still here. Maybe we need a fast from all the chemical applications and the food substitutes. Maybe it won’t solve everything but maybe it will give us some understanding and insight we did not have before. In the end, some of the decisions and applications that have been made (or marketed) are short-term fixes and not sustainable.

The most disturbing thing to me is nobody is asking these questions, at least not to the degree they should be. At the very least, these questions need to be open to discussion and I was not hearing that at the meeting in Sacramento or anywhere else. If these questions are not discussed seriously and beekeeping continues to move in the same direction as it has been moving the last 50 years then I see nothing but more of the same in the future. These monster problems faced by beekeepers now are at least partially due to a “man-made belief system” that will/has bankrupt the bees vitality and immune system with over medication and bad nutrition at the same time the bee is assaulted with pesticides, stress etc. Beekeeping will not get better with the old management techniques because the old ways are a medicinal and nutritional weakening event. Go back to the basics; give the bees what they need. We need answers that will take beekeeping forward. It is vitally important for us as human beings, maybe even for reasons beyond our comprehension.

Author’s note: Thanks to Paul Younger, Patagonia Honey, for insight, improvements and suggestions.