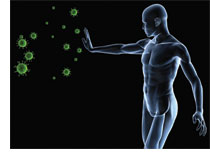 Moducare® is a patented blend of plant sterols and sterolins, and the only sterol/sterolin product clinically proven to be effective in immune modulation. Moducare can be considered an adjunct to help shift immune responses to a more balanced state. It enhances the activity of various immune cells and increases the killing ability of specialized cells, called Natural Killer cells, responsible for immune surveillance. Moducare also has anti-inflammatory properties and helps reduce the effects of stress on the immune system by managing the release of cortisol, a stress hormone. Moducare is well-tolerated, with no known interactions with either prescribed medications or natural supplements. Plus, long-term studies have found that it has no significant negative side effects.

Human Research Proves Plant Sterols Action
We call sterols the forgotten nutrient because although thousands of research studies have been preformed on this nutrient, it has not been given the recognition it deserves.

Over 4,000 published studies to date have examined phytosterols and 140 of these studies are double-blind, placebo-controlled human trials. Rheumatoid arthritis, cervical cancer, diabetes, immune function, prostate problems, HI V, herpes, hepatitis C, allergies, stress-induced immune suppression, chronic fatigue, tuberculosis, breast cancer, and high cholesterol are only some of the diseases where sterols and sterolins have been shown to be extremely effective.

Plant sterols and sterolins are essential for modulating (balancing) the immune system, enhancing it if it is under active, and reducing it when it is over stimulated. They perform the balancing act very effectively. Patrick J.D. Bouic, Ph.D., has shown in his research that plant sterols and sterolins are effective in enhancing an under active immune system and/or decreasing an overactive one. This happens without the side effects associated with pharmaceutical substances such as interferon, prednisone or methotrexate. Sterols and sterolins have been evaluated in a 25,000-person safety study and found to have no side effects, no drug interactions, and no toxicity. It is safe for children, as well as pregnant and nursing mothers. Only those who have had an organ transplant cannot take plant sterols because they may stimulate rejection.

Plant sterols and sterolins also increase the number and action of natural killer cells (our cancer fighters) and increase our DHE A levels naturally. They are also able to reduce the stress hormone cortisol and the proinflammatory immune factor, interleukin-6, and tumor necrosis factor alpha (TN F-a). Interleukin-6 and (TN F-a) are increased in autoimmune disorders, osteoporosis, over exercising, fibromyalgia, and osteoarthritis. Reduction of this inflammatory agent is the key to halting symptoms and pain. This is exactly what plant sterols and sterolins do.

Sterols—Great Stress Busters
Chronic stress is so negative that it can promote and exacerbate most disease. Numerous studies have linked our ability to deal with stress to our susceptibility to the common cold as well as more serious diseases such as cancer. Adults who have recently lost a loved one or have been divorced or separated tend to have the highest cancer rates. Unrelieved stress gradually weakens and suppresses our immune system, causing disease. Stressful situations promote the release of cortisol, the stress hormone which in turn causes the secretion of a negative immune factor interleukin-6. Abnormal levels of IL-6 are associated with osteoporosis, autoimmune disease, asthma, inflammatory diseases including arthritis, and more. We know that phytosterols are effective in reducing IL-6, cortisol and other negative immune factors. They also improve DHEA, a hormone known to help fight the effects of stress.

An overview follows of a few of the outstanding studies published.

Sterols Halt Hepatitis C
Hepatitis C is now occurring in epidemic proportions. Over four million North Americans are infected with hepatitis C. Liver specialists are overwhelmed as they struggle to deal with the increase in the incidence of this disease. Hepatitis C is the leading cause of liver transplants in North America. Physicians using sterols and sterolins to treat hepatitis C have already shown that with 90 days of the sterols and sterolins treatment liver enzymes and viral load normalize.

Sterols, Heart Disease and DHEA
A team of Canadian researchers discovered that an error in the regulation of certain immune cells that fight bacterial infections may be implicated in heart attacks and strokes. In a study published in the International Journal of Immunopharmacology, plant sterols and sterolins are shown to improve the ability of the immune system to fight bacterial infections. Sterols and sterolins, not antibiotics, may be the way to treat bacterial-induced heart disease.

Prostate Problems Eliminated
Urologists in Germany have been using plant sterols and sterolins for over two decades for the treatment of enlarged prostate. In one double-blind, placebo-controlled study of 200 patients with an average age of 65 and with BPH, subjects were given sterols and sterolins for six months. The treatment group showed a rapid reduction of the symptoms mentioned above and an increase in peak urinary flow and a decrease in inflammation. When does a health food product become mainstream? Do 4,000 medical studies constitute good scientific evidence of a nutrient’s effectiveness? We believe plant sterols and sterolins will change the way we treat disease in the future. Instead of treating symptoms, we will get directly to the source of the symptoms and repair the cause of the disease.