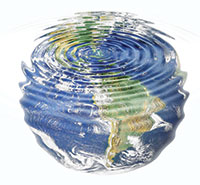 One day several years ago, I had a powerful experience in which I understood how a person can impact for the better simply by the power of their presence. I saw how one’s inner feeling states projects an energy that can profoundly impact those around them. I grasped the meaning of Ghandi's words, “Be the change you want to see in the world.” If we want peace in our world, we must first be peaceful within ourselves and as we radiate our inner peace, others feel it and in response also become calm. If we wish for love, we must first embody the presence and fullness of love in our very own hearts and then this love can touch others. In this manner our sheer presence serves to affect and influence others. People who carry an aura of light and peaceful well being automatically lift the spirit of those around them and in doing so, create positive outcomes in any given situation. Others, who emit fear, paranoia, or hate, emit a dark energy that repels, instills fear, mistrust and discord.

I learned directly about the power of one’s presence in an argument I had with my husband. We were quarreling over a trivial matter where neither one of us would see the other's point of view. We were each entrenched in our own position being more invested in winning the argument than in healing the divide. As the battle of wills escalated, we found ourselves arguing late into the night. Unable to resolve the quarrel, we went to bed angry at one another. In the morning, I woke up before he did and with cup of coffee in hand, sat looking out at the beautiful trees in my back yard. I dreaded his waking, as I knew our argument would continue, a pattern between us of talking a problem to death. Suddenly, out of the blue, as I gazed at the trees, something shifted within me as a feeling of love permeated my entire being. The presence of love powerfully coursed through my body and transformed me. It was not necessarily towards him, I solely became filled with a love from deep within me. Then, with a frown on his face my husband walked into the room where I sat, expecting the fight to continue. He looked at me and without a word passing, he instantaneously sensed my state of being suffused in love and I saw his demeanor soften before my eyes. We both knew that the argument was over without needing further discussion. We were both enveloped in a powerful presence of love, which healed the divide. There was no resolution to the argument between us. The perceived issue no longer existed. I am not implying that the mere presence of love or other positive qualities always will solve all disputes or altercations the way it did with my husband that day. But, it does always color the outcome because even if further discussion is needed to resolve a matter, it can take place in an atmosphere of cooperation and positivity so that a harmonious resolution can be achieved. The quality of one’s inner state of presence that a person brings to any situation is the key, which affects the others around them.

Since that fight with my husband, I have applied this understanding in all my relationships allowing me to realize more and more that I am a potent agent of positive change by the genuine quality of presence I embody. Earnestly cultivating my own inner shifts towards embodying ever deepening qualities of the soul such as, love, harmony, peace, and compassion, has resulted in a sense of joy and inner confidence growing within and around me. It has enriched my relationship with my husband, children, friends and clients and even the strangers I encounter every day such as, taxi drivers and sales clerks. People seem to go out of their way to be helpful to me because they sense my good will. Time and time again, I notice how the presence of my own state of being makes a direct difference in another person’s day, if even in a small way, by uplifting their spirit or, making them feel good about themselves and in turn people’s innate goodness flows back to me. The bible states it well, “For whatever a man sows he shall reap.”

Some people think that by changing their outer circumstances, their inner emotions and attitudes will improve and only then they will feel happier and more fulfilled. However, this is not the case. Feeling better so that one can live in more positive states of mind requires an inner shift in one’s perceptions and emotions. True fulfillment and happiness always starts first from inside then it naturally can be expressed in the world. Our innermost feelings, thoughts and attitudes always create our outer reality. There may be some small value in changing the outside; sometimes, an outer change seeps into the inside and makes one temporarily happy. But most of the time, if one changes the outside only such as, their environment, or, the city they live in, or, the person they are with they will wind up disappointed, because they remain the same person within and the same circumstances they tried to avoid by making the change persists and is recreated from their own consciousness. They might feel better for a very short while but, ultimately their state of mind of unhappiness, depression, or anger returns because their problem has not been healed from within.

For example, when a person carries unhealed anger or, feels victimized, or, fears rejection, they will bring those same dynamics to their current situations and create the very same situations they were trying to flee from. When one is afraid to be hurt in an intimate relationship, they may think that a new partner is the answer. Yet, they will carry their fear into the new relationship and in subtle and unconscious ways push the new partner away by being closed off and afraid to be open, trusting or vulnerable. Outer changes most naturally occurs after an inner shift, when one has grown in self love and then their negative relationship can end and a better one is drawn in. Or as the person gains self-confidence they attract a better paying new job. Inner change creates the conditions and circumstances for outer change to occur.

There is a direct correlation between ones attitude toward themselves and how they perceive and treat others. As one grows in self-compassion, the more it is naturally expressed towards others. Growing up in an aura of parental expectations or criticisms, whether these were overt or, subtle, a child will internalize their parents disapproval and develop an “inner critic,” which manifests in a small voice within that constantly reminds one of where they are lacking, “You are not successful enough, thin enough, good looking enough, as good as another person, you need to achieve more, try harder, etc.” Everyone has a negative inner critic which gets projected outwardly unto others. If one is not okay within, then we can’t be okay with someone else. Thus, judgments, whether loudly expressed or, inwardly felt become projected on one’s family, friends, co-workers and even extend more globally towards those of a differing race, ethnicity, gender, sexual orientation, or culture as these flourish in the atmosphere of one’s lack of self love. This is why in order to change one’s world whether in a small or large manner; they need to embody an ever-deepening sense of self acceptance, self love and compassion.

This is the most fundamental and important work we can do for the world: to love and accept our self just as we are, with all our flaws and imperfections. This softens our hearts and melts our divide from others. Thus, a person’s sincere self-love affects others around them. It is like throwing a pebble into a pond of water and it ripples out far and wide; one person at a time touching the life of another.

I directly experienced how my growing sense of self compassion unexpectedly shifted strangers around me while walking down a busy New York City street last year on a cold wintry night. I had stopped by a food cart in order to buy a hot drink to warm up. A homeless man stood near the cart, he was acting erratically and singing at the top of his lungs. As a group of young people came and stood behind me in line they began to speak judgmentally about the man making disparaging comments about him. Even though his behavior frightened me, I could see by the way he looked at the food in the cart that he was hungry. Identifying with his feeling of hunger and cold, compassion for him overtook me. Afraid to approach him myself, I asked the food cart operator, to ask the man if he wanted something eat and that I was happy to pay for it. When asked, he shouted, “A burger and I want it grilled just like I want to smash and grill your brain on the hot stove.” Shocked, no one uttered a word. The sense of being in the presence of madness and unpredictability permeated the air. After being given his hamburger and my paying for it, I asked the operator to ask him if he wanted a drink. In response, he bellowed, “Yes, a Coke. I am thirsty!”

The operator then asked me for a dollar for the drink. I fumbled in my purse and could only find a $100 dollar bill and my credit cards. I could not find a single dollar, or any small change and asked if I could pay with a credit card. Suddenly, the young people behind me chimed in, “We want to pay for his Coke,” and handed me a dollar. Their attitude has shifted in witnessing my kindness and suddenly they too wanted to help. Then out of the blue, the homeless man turned to me and looking directly into my eyes with the most profound humility and unexpected clear presence of mind calmly said, “Thank you, lady.” He had registered the kind-heartedness and genuinely connected for a few moments with another human out of a very crazy state of mind. A sudden feeling of benevolence permeated the air. I left the scene feeling a fullness of heart as if I had witnessed something . . . a miracle . . . how one person’s simple act of generosity could alter the negative attitudes of others.

As we change ourselves, we change the world and in doing so, each of us creates a more joyful and abundant life for ourselves, and at the same time, a world filled with an ever-increasing harmony and peace. Can you imagine everyone doing that? What a great place this world would be, as we would live contentedly and in peace in the true spirit of being our brothers’ and sisters’ keepers.