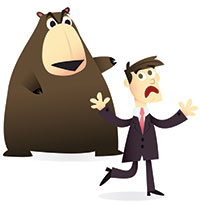 Throughout my career as an acupuncturist, I have been privileged to work with dynamic, successful, and very stressed people. They often point out that their stress is as exciting as it is damaging; therefore their goal is to feel better without changing their schedules. The good news is curtailing the damage of stress does not necessarily mean we have to change the actual activities we are doing; rather, we have to change the way we perceive them.

The sympathetic nervous system is also known as the fight or flight response. This triggers adrenaline to pour throughout our bodies in response to a perceived threat. The physiological response looks like dilated eyes, quickening heart rate, increase blood pressure, and our overall alertness heightens. This is us when we’re being chased by a bear—or when we think we are being chased by a bear.

The SNS was meant to be a short-term response that will help us either fight for our survival or give us the energy to try and run to safety. In order for the SNS to have the effectiveness that it does, normal physiological functions are compromised.

In contrast, the parasympathetic nervous system is responsible for resting and digesting. The PNS is most active during non-stressful situations. In this state, eyes constrict, blood pressure calms down, heart rate slows, and the digestive tract resumes healthy activity. This is us when we are on a relaxing vacation. There is a lot of research looking at how these nervous systems are related to health and illness. In fact, one of the postulations about how acupuncture works is it is said to calm the hyperstimulation of the SNS by activating the PNS.

Originally, the SNS response evolved out of the need for survival in the wild. We would either find safety or the bear would kill us. The threats were very real and tangible and often very short lived. As such, the body evolved to handle short bursts of activity from the SNS. This is completely normal and sustainable for a finite amount of time. With our technology advancements to more sedentary and protected lifestyles, there must be another reason for our SNS to be raging out of control. In modern times the threats are just as powerful and much less obvious than a confrontation in the wild.

Just because we can’t put a band-aid on an injury, or we cannot ‘see’ the damage that is being done, does not mean we are healthy. Constant stimulation of the SNS contributes to the creation and development of illness. Damaged cells continue to replicate unchecked, inflammation grows, and hormones are unbalanced. Without intervention, this illness will continually be created and worsened as the body becomes more and more unable to regulate itself. This looks like something that is often classified as ‘chronic illness’. And it is our perception of danger that is leading this physical disintegration.

The most important aspect of the SNS is that it is activated in response to a perceived threat to someone’s survival or way of life. Anytime someone encounters a situation, real or fantasy, that might be threatening to their way of life or ‘sense of self’, the SNS will be activated. With perceived demands of social expectations and fears of being seen as a failure or being humiliated, the SNS is active for days, weeks, months, and in some cases, years. With these chronic stresses based in some perceived culturally expected behavior, it is no wonder people have a hard time clearing their mind. Remember, we can’t have full relaxation PNS response while having a full-blown SNS adrenaline outpouring. The two systems inhibit each other.

Let’s take a closer look at something that happens to all of us at one point or another: deadlines. The science of the SNS says that a tough deadline at work or school can be just as stimulating to the body as being chased by a rabid dog. Often, the deadline tends to be more damaging because it is a sustained threat. Once you and the dog are separated, the threat is over. But, as long as the deadline looms, the SNS response can be active.

There is nothing intrinsic to a deadline that means the fight or flight response has to be activated. The deadline is only as charged as we choose to make it. This example only works if the person trying to meet the deadline cares about meeting it. The more expectations we have of ourselves, the more volatile and imbalanced our energy can become.

Why would we care about meeting the deadline in the first place? Some of the suggestions are that doing well could mean we will look good in front of our peers, or we might get a promotion. Not meeting the deadline would mean failure, or that we are not good enough for the job. For those of us who care about what other people think of us, meeting that deadline could be a matter of perceived life or death. This will definitely stimulate the SNS.

Coping mechanisms to deal with this perceived stress are numerous. Rest, medication, exercise, denial, talk therapy, or substance abuse, are some examples—admittedly some more healthy than others. But why cope when you can defuse the loaded situation altogether? The stressor can remain, but our understanding and relationship with it can change.

Our lives become healthier, the PNS is allowed to activate, when we realize our immediate survival is not threatened. The same reason the SNS is so damaging to people today is the same reason people can heal: there is no imminent danger to our survival. It is the mind’s perception that creates the physiological response. The body isn’t faulty, rather it is our thinking that has gone awry. We are not entirely to blame for this. The cultural programming has pervaded beyond basic needs. It is up to us to unlearn the programming that is not helping us live our best lives possible.

Those of us who look outside of ourselves to determine our ‘sense of self’ are in the most precarious situation. In looking for positive praise from our parents, children, co-workers, or God, we become subject to a massive litany of obvious and subtle social suggestions about how we should or should not behave, about what is expected from our choices, thoughts, actions and reactions.

If we are constantly trying to please others, we are abandoning our integrity to the subjective measure of people and forces outside our control. Despite the illusion these suggestions have, we cannot control how people perceive us. Trying to control something we ultimately cannot is horrifying; it is no wonder the body responds with the fight or flight mode in the face of unmitigated expectations.

When we are unconscious to the suggestions that are playing in our head, we behave like a pinball being bounced around at the whim of others. We lose control of ourselves and the intensity of our fears can grow out of control. The expectations, the ‘should’ and ‘should nots’, are the lion that hunts us all day and night. I am not advocating getting rid of all expectations and suggestions, but we must become aware of what is motivating our actions. We can only control our interpretations of our perceptions.

What would happen if we could limit or remove completely the expectations and suggestions that lead to that perceived stress in the first place? Then we would be embarking on a new lifestyle that promotes conscious introspection and self-respect while unlocking the door to greater human potential. When we shift from reactivity, the PNS is allowed to thrive.

When we become aware, we can intervene and defuse the internal chatter that is the vise squeezing the life out of us. The key is in consciousness—which comes from unmerciful and unscrupulous examination of all our beliefs. When we are chronically sick, everything has to be up for reexamination: childhood beliefs, daily routines, theologies and superstitions. More than fast food, poor sleep, lack of exercise, the cultural expectations, shoulds and should nots, and their effect on our nervous system, are the biggest opponent to feeling happy and healthy.

His specialties include the use of acupuncture and Chinese herbs for the treatment of pain, women’s health, and stress-related diseases such as fatigue, insomnia, and irritable bowel.