According to scientists at the University of Minnesota the percentage of the population that smokes has not changed for more than a decade. Dr. Harry Lando expressed real concern about this fact recently when he said, "I have become discouraged that we can't improve our success rates beyond a certain point. It's critical to look for alternatives for people who are simply not quitting."

Dr. Lando is definitely right, not enough people are quitting smoking, but it's not because people aren't trying to quit. Over 90 percent of smokers say they want to quit and yet of those who try 70 percent are smoking again within three months and 90 percent are smoking again within 18 months. Perhaps Mark Twain said it best when he is reported to have said, "I have no problem quitting. I've done it hundreds of times." This echoes the experience of most smokers who will tell you they have tried everything and nothing works. Only 10 percent of smokers who try to quit each year are successful.

Numerous scientists have tackled this nicotine addiction problem over the past two decades with very limited success. The nicotine patch was supposed to be the "big answer" but a study from the University of Oxford, Institute of Health Sciences found that only eight percent of smokers in their trial were still abstinent after eight years. Researchers at Dundee University in Scotland may have found out why the patch and other nicotine replacement programs don't work very well. Researchers in Dundee's Division of Pathology and Neuroscience's say smokers get short-term relief from their anxiety because nicotine temporarily increases levels of dopamine, one of the "feel good" hormones. However, the nicotine patch only causes a small amount of dopamine to be released, not enough to eliminate the desire for more nicotine.

The most recent cessation strategy from the pharmaceutical perspective is injections of drugs that block the delivery of nicotine to the brain's nicotine receptor sites. The Anticholinergic Block Method uses atropine and scopolamine to intercept nicotine's delivery to neuroreceptors, thus denying the brain the addictive fix it is seeking. This approach is only slightly different from other drugs in pill or shot form which, when exposed to nicotine causes the smoker to experience nausea, thus encouraging him or her to avoid this unpleasant experience in the future.

Both nausea and the interceptor drug approach do not address the cravings, which will continue to occur as long as the brain is denied the hormones that it needs to function. After several days or weeks on these drugs, most smokers who are trying to quit will simply override the internal message and get the nicotine fix they need. The brain is wired for survival and it will find ways to by-pass the messages delivered by these prescription drugs. As the brain makes these adjustments it would take higher and higher doses of any medication in order to reactivate the feelings of nausea or the interruptions to the neuroregulators in the brain. This is why the number of cigarettes needed increases over time and why the dosage of almost any medication must be increased over time in order to achieve their intended health stabilizing effects. The body eventually adapts and begins to neutralize those substances that it feels are not natural and beneficial to it. In fact, most medications are difficult for the liver to process, which causes an inordinate amount of the body's antioxidants and energy to be used in the detoxification of these pharmaceuticals.

The various stop smoking formulas just reviewed ignore the basic truth that the brain is a complex biochemical factory that requires certain hormones and nutrients in order to function at an optimal level. Hormones like dopamine, serotonin, and tryptophan are vital to the maintenance of stable moods and clarity of focus. These hormones are naturally produced in the body from the nutrients we consume and it is an imbalance or inadequacy in certain nutrients that often causes a shortage in these feel-good hormones.

Two pioneers in the field of biochemistry and nutritional factors affecting that bio-chemistry were Roger J. Williams, Ph.D., author of Biochemical Individuality: The Basics of the Genetolrophic Concept and Carl C. Pfeiffer, Ph.D., M.D., author of Nutrition and Mental Illness: An Orthomolecular Approach to Balancing Body Chemistry. Dr. Williams was one of the first scientists to identify genetic differences in individuals such as the potential for large variations of islets in a person's pancreas. (Can range from 200,000 to 1,200,000 islets.) Dr. Pfeiffer took this concept to the next level in terms of mental illness by identifying that some people needed larger amounts of certain nutrients than others. Dr. Pfeiffer was able to cure many patients with mental illnesses such as depression and schizophrenia by addressing their deficiencies of zinc, magnesium, manganese, vitamin B6 and other nutrients.

These pioneers paved the way for modern-day doctors who have built on this orthomolecular science. Michael Lesser, M.D. has developed special diets for every type of mood disorder and shares them in his book The Brain Chemistry Diet. Joan Mathews Larson, Ph.D., has been helping people resolve their mental illness and addiction challenges at her clinic in Minneapolis for over 15 years. She shares her experiences and protocols in best-selling books such as Depression Free Naturally and Seven Weeks to Sobriety.

We can learn a lot from these brilliant doctors and scientists when it comes to addressing the addictive challenge facing smokers who would like to quit. Studies have found smokers to be deficient in many nutrients including vitamin C, which is destroyed at the rate of 25-50 mg for every cigarette smoked. Smokers are also deficient in zinc, B vitamins, magnesium, amino acids, and omega 3 fatty acids. These nutrients are crucial to cellular health in the brain and throughout the body. One of the most critical unmet needs are the nutrients that produce serotonin. Some scientists (at Scotland's Dundee University) believe that boosting serotonin levels would be far more effective in the reduction of addictive cravings than medication or nicotine substitutes. The problem is these scientists want to stimulate this serotonin production with yet another drug instead of using a natural approach.

Serotonin is produced when foods rich in the amino acid tryptophan (turkey and almonds) are eaten and then converted to a smaller substance called 5htp so it can pass the blood-brain barrier. Once in the brain 5htp is then converted to serotonin by the hypothalamus and then becomes available to the brain's neurotransmitters. This process has been explained in a simplified way here and should not be misconstrued to imply that eating lots of turkey and almonds will eliminate the craving for nicotine. To accomplish a steady and adequate supply of serotonin it is not only necessary to eat tryptophan-rich foods, it is also necessary to eat quality complex carbohydrates like oatmeal and brown rice because the tryptophan needs a steady release of insulin from the pancreas in order to get the glucose needed for the conversion to 5htp. The bottom line for any smoker who wants to quit permanently, and become healthier in the process; there is a clear and scientifically proven way to accomplish this goal with the help of good nutrition and other natural therapies. 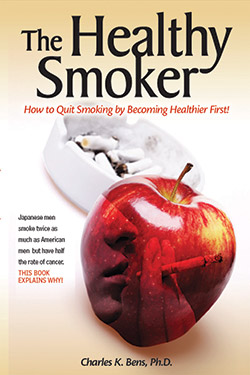 The program to accomplish this type of healthy smoking cessation is described in my new book The Healthy Smoker: How To Quit Smoking By Becoming Healthier First. This title may shock some readers, but it is based on my personal knowledge of several people who managed to stay very healthy in spite of their smoking habit. They accomplished this amazing feat by eating a very healthy diet with lots of vegetables, fruits, complex carbohydrates, quality protein, and essential fatty acids as well as exercising daily, practicing stress reduction and taking supplements. Some of them danced and others walked or took yoga classes. When they were tested to determine their levels of oxygen and antioxidants, as well as their blood chemistry profile, they consistently scored better than almost all non-smokers tested. They were surprisingly healthy smokers.

This is not to suggest that anyone should justify smoking because they can become healthier following a certain diet or exercising more. There are still very unacceptable risks for anyone who smokes. What it does suggest is that previous smoking cessation programs have likely failed because they did not address the need to detoxify the body, improve nutritional intake, and increase the smoker's level of physical activity.

There are many other reasons to engage in this more complete health improvement program beyond the benefits of reversing the addictive hold of nicotine. People who are finally able to quit become healthier day-by-day with the absence of smoking, but it can take 10 years or more to return the body to a state of health equivalent to that of a non-smoker. In fact, many smokers who quit still suffer heart attacks or get cancer due to the damage done to their bodies while they were smoking. A much healthier diet, the right supplements, exercise, and periodic detoxification can decrease this recovery time, and it can reduce the probability that some disease will occur in the future. If you are going to quit, why not get all of the benefits instead of just some of them?

For more information on The Healthy Smoker program go to www.behealthyatwork.com or www.Drcharlesbens.com.

Charles K. Bens, PhD is an author, speaker and wellness consultant specializing in the prevention and reversal of chronic disease. He is the founder and president of Healthy @ Work, Inc. a wellness education and consulting company focused on improving the health of employees. The company provides workshops on a wide range of health topics. He has written nine books including Healthy at Work: Your Pocket Guide to Good Health, The Healthy Smoker: How To Quit Smoking By Becoming Healthier First and over 200 articles. Dr. Bens lectures all over the world on organizational change and improvement as well as on wellness and health improvement. And was selected by Ottawa Regional Cancer Foundation as the Vail Visiting Professor for 2013.