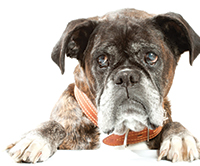 Autoimmune Hemolytic Anemia (AIHA). In this disorder, the pet forms antibodies against its own red blood cells, causing anemia.

Hypothyroidism. The pet forms antibodies against its thyroid gland.

Immune-Mediated Thromobocytopenia (ITP). In this disorder, the pet forms antibodies against its own platelets, causing reduced blood-clotting ability.

Pemphigus. A number of disorders make up the pemphigus complex of diseases. In these disorders, the pet forms antibodies against its skin.

Rheumatoid Arthritis (RA). In this disorder, the pet forms antibodies against its own joint tissues, causing lameness and arthritis.

Systemic Lupus Erythematosus (SLE). Also simply called Lupus, in this disorder, the pet forms antibodies against a number of its tissues, including blood cells, skin, and the kidneys.

Certain vitamins and minerals function in the body to reduce oxidation. Oxidation is a chemical process that occurs within the body’s cells. After oxidations occurs, certain by-products such as peroxides and “free radicals” accumulate. Theses cellular by-products are toxic to the cells and surrounding tissue. The body removes these by-products by producing additional chemicals called antioxidants that combat these oxidizing chemicals.

In disease, excess oxidation can occur and the body’s normal antioxidant abilities are overwhelmed. This is where supplying antioxidants can help. By giving your pet’s body extra antioxidants, it may be possible to neutralize the harmful byproducts of cellular oxidation.

Several antioxidants can be used to supplement pets. Most commonly, the antioxidant vitamins A, C, and E, and the minerals selenium, manganese, and zinc are prescribed. Other antioxidants, including N-acetylcysteine, Coenzyme Q10, Ginkgo biloba, bilberry, grape seed extract, and pycnogenol may also be helpful for a number of disorders.

There is no “correct” antioxidant to use. Dosage varies with the specific antioxidant chosen.

Proanthocyanidins (also called pycnogenols or bioflavonoids, a class of water-soluble plant-coloring agents; while they don’t seem to be essential to life, it’s likely that people and pets need them for optimal health) are naturally occurring polyphenolic compounds found in plants. Most often, products containing proanthocyanidins are made from grape seeds or pine bark. These compounds are used for their antioxidant effects against lipid (fat) peroxidation. Proanthocyanidins also inhibit the enzyme cyclooxygenase (the same enzyme inhibited by aspirin and other non-steroidal medications); cyclooxygenase converts arachidonic acid into chemicals (leukotrienes and prostaglandins), which contribute to inflammation and allergic reactions. Proanthocyanidins also decrease histamine release from cells by inhibiting several enzymes.

Some research suggests that pycnogenol seems to work by enhancing the effects of another antioxidant, vitamin C. Other research suggests that the bioflavonoids can work independently of other antioxidants; as is the case with many supplements, there probably is an additive effect when multiple antioxidants are combined. People taking pycnogenol often report feeling better and having more energy; this “side-effect” may possibly occur in pets as well.

More research on antioxidants and other complementary therapies in the treatment of autoimmune disorders are needed.

Next month we will look at fatty acids as a treatment for autoimmune diseases.