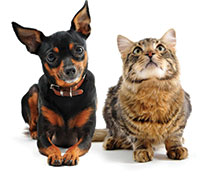 There are several natural treatments for heart disease in cats and dogs, including Taurine, Carnitine, Hawthorn and Coenzyme Q10. This month we are focusing on the use of CoQ10 for your pet’s heart health.

CoQ10 (ubiquinone) is a powerful fat-soluble antioxidant that is found in every cell in the body. It plays a fundamental role in the mitochondria, the parts of the cell that produce energy from food. Coenzyme Q10 appears to control the flow of oxygen within the cells as well as functioning as an antioxidant to reduce damage to cells by harmful free radicals. Every cell in the body needs CoQ10, but there is no US Recommended Dietary Allowance since the body can manufacture CoQ10 from scratch.

Because CoQ10 is found in all animal and plant cells, we obtain small amounts of this nutrient from our diet. However, it would be hard to get a therapeutic dosage from food. CoQ10 appears to assist the heart muscle during times of stress, perhaps by helping it use energy more efficiently. While CoQ10’s best-established use is for congestive heart failure, ongoing research suggests it may also be useful for other types of heart problems and for a wide variety of additional illnesses. Preliminary research has shown reduced levels of CoQ10 in the hearts of people and pets with heart disease.

In people, the typical recommended dosage of CoQ10 is 30 to 300 mg daily, often divided in two or three doses. CoQ10 is fat-soluble and is better absorbed when taken in an oil-based soft gel form rather than in a dry from such a tablets and capsules. In pets, the typical dosage is 30 mg every 24 to 48 hours, although your veterinarian may alter this dosage depending upon your pet’s size and individual needs. (Some doctors feel that increasing the dosage is necessary for larger pets; for example, 80 mg every 24 to 48 hours might be recommended for a 100-pound dog.) In people, the best-documented use of CoQ10 is for treating congestive heart failure and when taken along with conventional medications, not instead of them. People with congestive heart failure have significantly lower levels of CoQ10 in their heart muscle cells than healthy people. While this does not prove CoQ10 supplements will help people with heart failure, it has prompted researchers to try using CoQ10 as a treatment for heart failure. In people, at least nine double-blind studies have found that CoQ10 supplements can markedly improve symptoms and objective measurements of heart function when they are taken along with conventional medication.

Weaker evidence suggests that it may be useful for cardiomyopathy (several small studies suggest CoQ10 supplements are helpful for some forms of cardiomyopathy) and other forms of heart disease. It has also been suggested as a treatment for high blood pressure (although scientific evidence for this use is weak) and to prevent heart damage caused by certain types of cancer chemotherapy (such as adriamycin). Since CoQ10 might conceivably interfere with the action of other chemotherapy drugs due to its antioxidant activity (although there is no good evidence that it does so), check with your veterinarian before using CoQ10 if your pet has cancer that requires chemotherapy.

In experiments in dogs, CoQ10 was found to exert a protective effect against oxidative injury to the heart. Stabilization of body weight, improved clinical status, and a slowing of the progression of signs have been seen in dogs with heart disease treated with CoQ10.

CoQ10 appears to be extremely safe. No significant side effects have been found; however, pets with severe heart disease should not take CoQ10 (or any other supplement) except under a veterinarian’s supervision.

The maximum safe dosages of CoQ10 for young children, pregnant or nursing women, or those with severe liver or kidney disease have not been determined; the same is true for pets of similar circumstances.