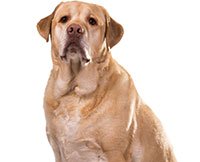 Cushing’s disease, hyperadrenocorticism, results in overproduction of adrenal gland hormones, most commonly glucocorticoids. The disorder is relatively common in middle-aged to older dogs and rare in cats. Cushing’s disease usually occurs as a result of a benign (non-cancerous) tumor of the pituitary gland. Rarely, a tumor (benign or cancerous) of the adrenal gland(s) may occur. Long-term administration of corticosteroids causes a steroid-induced Cushing’s syndrome that usually resolves whenever the pet is weaned off the steroids.

Glandular Therapy
The most common therapy is glandular therapy, which uses whole animal tissues or extracts of the adrenal gland. Current research supports this concept that the glandular supplements have specific activity and contain active substances that can exert physiologic effects.

Several studies show that radiolabeled cells, when injected into the body, accumulate in their target tissues. The accumulation is more rapid by traumatized body organs or glands than healthy tissues, which may indicate an increased requirement for those ingredients contained in the glandular supplements.

In addition to targeting specific damaged organs and glands, supplementation with glandular supplements may also provide specific nutrients to the pet. For example, glands contain hormones in addition to a number of other chemical constituents. These low doses of crude hormones are suitable for any pet needing hormone replacement, but especially for those pets with mild disease or those who simply need gentle organ support.

Other Natural Treatments
Useful treatments can include natural diet, antioxidants, and herbal therapies such as, astragalus, burdock, dandelion root, nettle and Siberian ginseng. These therapies are not curative but are used to support and nourish the adrenal gland. As with any condition, the most healthful natural diet will improve the pet’s overall health. These can be used in conjunction with conventional therapies, as they are unlikely to be effective by themselves in most patients. The natural treatments are widely used with variable success but have not all been thoroughly investigated and proven at this time.

Conventional Therapy
Lysodren, a drug related to DDT, is the preferred conventional therapy. The medication Anipryl can be used, but response is variable. Other medications such as ketoconazole may also be effective in some pets. Treatment is life long, and pets must be regularly monitored for side effects.