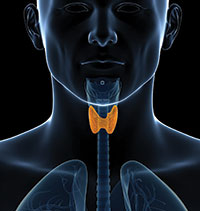 Having dealt with thousands of clients with inflammatory disorders, I find there is one connection most do not make before consulting with me—inflammation and their thyroid health. When a thyroid disorder is diagnosed, hypothyroidism resulted from lack of iodine in their food/supplements and from the inflammation in general. There is confusion about hypothyroid and the diagnosis of Hashimoto’s autoimmune thyroiditis…allow me to clarify.

Hashimoto’s is a disorder where the immune system attacks the thyroid gland—the resulting inflammation leads to an underactive thyroid gland or hypothyroidism. It is an autoimmune thyroid disease based on a dysfunctional immune system where your thyroid is being attacked by your immune system via antibodies—attempting to destroy your gland as if it is an enemy. Hashimoto’s disease is the most common form of hypothyroidism and it was the first condition to be medically classified as an autoimmune disorder.

I’ve written extensively about thyroid health and what I see as contributing factors that include gluten, intestinal health, chronic stress, low iodine levels, vitamin D deficiency, etc. That said, a big misconception exists that once you supplement with a natural remedy or prescription, you can eventually stop supplementation—WRONG. Once a thyroid disorder occurs, you can naturally help stabilize it through proper nutrition, detoxification and specific supplementation— you cannot and should not stop supplementation. The challenge with most thyroid supplements is that the body is not able to convert from T4 to T3. I find the best option is to use a sublingual homeopathic remedy that contains all three varieties of natural iodine so that it is easier utilized by the body without concern about absorption conversion.

Hashimoto’s disease (inflammation of the thyroid gland) is one of the major reasons for low thyroid levels. This disorder not only damages the gland’s ‘hormone releasing capacity’ it also destroys the gland. Iodine deficient diets, diets high in food additives and preservatives, malfunctioning of the pituitary gland or hypothalamus, infection of the thyroid gland, radiation treatments to treat hyperthyroidism and congenital defects are some other reasons responsible for low thyroid levels. Birth control pills are also harmful to the thyroid gland—estrogen inhibits the gland’s activity.

Replies to Your Questions…

• My Physician says I shouldn’t use thyroid medications when conventional testing shows I’m hyper as a result of Hashimoto’s. Do you agree? The hyper in Hashimoto’s is caused by the die-off of thyroid hormones that then dump them into your blood. With Hashimoto’s disease you will usually swing between hypo and hyper. But to say you shouldn’t be on thyroid meds is wrong in my opinion from experience consulting with patients with Hashimoto’s. The objective is to stop the attack and the swings, and the only way to do that is to be on a bio-available thyroid supplement, and raise the levels high enough to stop the attack, which in turn will stop the hyper swings. You’ll have to fight your doctor’s tendency to hold you too long on each raise, or to dose you by the TSH or other labs. NOTE: A patient from Germany informed me that there is government-directed iodination of practically every food that is processed, including milk. And with this has come an explosion of Hashimoto’s in the last 20 years!

• Can I take iodine when I have Hashimoto’s? Most likely because by performing an iodine loading patch test you can confirm if you have low iodine. And since iodine is the main component of thyroid hormones, plus has anti-cancer benefit, the use of iodine can be a wise decision. Some Hashi’s patients do wonderful on iodine and regain their quality of life. For others, it’s tricky to find just the right balance because it can trigger hyper symptoms. The problem may not be being on enough iodine, it is usually from supplementing with a form of thyroid that is not easily converted. It’s also key to be on selenium and other supporting nutrients with iodine.

Selenium and Thyroid A Vital Team—

What does selenium do for your thyroid? How is it connected to iodine? Substances known as selenoproteins convert the storage of hormone T4 into the active T3 hormone. They do this by removing one iodine atom from the T4. But, selenium has other relationships with iodine as well. It is well documented that a severe iodine deficiency leads to neurological and myxedematous cretinism (a congenital condition). It is only when a severe selenium deficiency is coupled with a severe iodine deficiency does the latter manifest. Iodine deficiency also causes goiter but a selenium deficiency results in a “weighty” or heavy thyroid as evidenced by ultrasound results. Studies show that selenium protects against goiter and iodine is proving to protect against a heavy thyroid.

In addition to its affiliation with iodine, selenium is responsible for other regulatory functions within the thyroid. Selenium deficiency leads to the exacerbation of Graves, hypothyroidism, Hashimoto’s and other thyroid disorders. Recent studies have shown that selenium supplementation can reduce serum levels of T4, Free T4, and Reverse T3. To explain, the thyroid produces hydrogen peroxide during the production of T4. While some hydrogen peroxide is essential for proper functioning, excessive amounts of it can lead to high T4 production, which results in a lower T3 availability. Too much hydrogen peroxide will also cause cell destruction. Selenium as an antioxidant breaks down excessive hydrogen peroxide and prevents cell damage and necrosis of thyrocytes.

Selenium-rich Foods and Supplements
Several factors need to be kept in mind when supplementing for selenium. Yes, selenium is available through food and over-the-counter supplements. The following foods are rich in selenium:

Keep in mind that in order for food to be selenium-rich, it must be grown or cultivated in a selenium-rich environment. Therefore, attempting to only supplement selenium through food sources is very challenging because of not knowing soil or environmental conditions.

Selenium Supplement Facts:
Supplements are a great way to ensure proper intake of selenium; however, you need to know the differences as it comes in many forms. Most selenium supplements are selenium yeast, selenomethionine, selenite and selenite. Selenite and selenite are both inorganic forms with an absorption rate of about 50 percent—increasing the chance of selenium toxicity. For this reason, organic forms of selenium, selenium yeast or selenomethionine, are safer and more readily absorbed. Selenomethionine has shown to have the best bioavailability with an absorption rate of about 90 percent and it is organic and yeast-free.

NOTE: Organic forms of selenium are the ONLY way to raise serum levels within the body.

Are digestive disorders connected to thyroid disease?
Research shows there can be a strong connection between Hashimoto’s disease and Celiac disease. Celiac disease is an autoimmune digestive disorder that results in an overreaction to gluten, a protein found in most grains like wheat, rye, oats and barley, which can be found in breads, cereals, pasta and many processed foods. The over-reaction, in turn, causes autoimmune damage to the intestines, which results in poor absorption of nutrients. (Oats, which can be gluten-free, are often contaminated within soil where gluten-containing grains were once grown or in the processing facility).

Gluten can also trigger the very autoimmune reactions that cause you to have Hashi’s, since reportedly, the cells of your thyroid are similar to the cells of gluten—i.e. an attack on one is going to make you ripe for an attack on the other. As a result, some Hashimoto’s patients experiment with eliminating gluten from their diets, and with good results… body talk never lies, learn to listen to what your body is telling you.

Thyroid Disorder and Fibromyalgia…
It is my experience that most of the fibromyalgia and chronic fatigue patients I counsel also have hypothyroidism—one of the conditions contributing to their condition as a result of a malfunction in how their body processes cellular waste. Keep in mind that both of these conditions are syndromes, meaning they are derived from a variety of conditions not just one major assault. The lack of hormones is responsible for the lack of activity and regeneration of the cells throughout your body. The manifestation of this decreased production includes dramatic weight gain, sluggishness, confusion, lowered sex drive, dry nails and skin, sleep disorders, thinning of the outer edge of the eyebrows, a chronic feeling of being cold, widespread inflammation and fatigue, to name a few.

A Natural Bioavailable Solution
For those of you choosing to purchase an easy-to-read booklet titled, “Your symptoms are NOT in your head, hips or expanding waistline, they’re probably in YOUR THYROID,” go to www.gloriagilbere.com to order either the eBook or paper version. This guide answers most of your questions about causes, effects and non-drug solutions for thyroid health and easily shows you how to test your own thyroid levels at home for around $5. It additionally explains how to naturally supplement with a homeopathic Wholistic Thyroid Balance that is used sublingually and does not require your body to convert into usable energy. For more information, go to www.gloriagilbere.com.