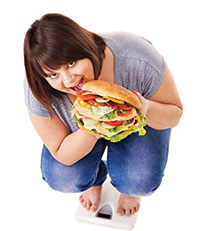 In order to achieve a state of fitness, a healthy weight must be maintained. For many people, however, weight maintenance is a long way off, and can only occur after a significant amount of weight is lost in the first instance. The fact is, losing weight and keeping it off is not a simple or consistently successful process as evidenced by the fact that the majority of persons who lose weight regain the weight within one to five years.1 Frequently, a gross oversimplification of the problem is the proffered solution to "just eat less." While eating less will indeed result in weight loss, it is difficult to eat less when your appetite is telling you to eat more. The real trick then, is figure out a way to reduce your appetite so that eating less is easier to do, allowing you to lose the weight and keep it off. That's where 5–HTP may be able to help.

WHAT IS 5–HTP?
5–HTP stands for 5–hydroxytryptophan. It is a type of amino acid. More specifically, the amino acid L–tryptophan is converted into 5–HTP in the body. 5–HTP can be synthetically produced, or it can be derived from natural sources. For example, 5–HTP is naturally occurring in significant levels in seeds of Griffonia simplicifolia.2 This plant grows in western African countries such as Ghana, Ivory Coast and Togo. In the traditional therapeutic application of those countries, the leaf and juice of the plant can be used for the treatment of wounds and nerve conditions, and also as an aphrodisiac.3 Many 5–HTP products on the market are derived from concentrated extracts of Griffonia simplicifolia.

HOW DOES 5–HTP WORK?
Serotonin is a nervous system messenger, also called a neurotransmitter, with many functions in the body. One of those functions is that it can help to reduce appetite. In fact, in the pharmaceutical market, the role of serotonin in appetite control and satiety (which means the state of being satisfactorily full and unable to eat more) is well established, and is the basis for selective serotonin reuptake inhibitor (SSRI) medications, which increase serotonin levels and help reduce food intake.4 Such medications are available by prescription only, and may have limited long–term efficacy.

An effective alternative to prescription SSRI medications for appetite control is 5–HTP. In the body, 5–HTP is converted into serotonin. In fact, 5–HTP readily crosses the blood–brain barrier and increases central nervous system (CNS) production of serotonin.5 And once the serotonin is produced it reduces or stops the hunger pangs. This is possible because there are numerous types of serotonin receptors in the brain, and two of them (called 5–HT1B and 5–HT2C) have been specifically recognized as promoting serotonin–induced satiety.6

WHAT'S THE PROOF?
There are five, double–blind, placebo–controlled, published clinical studies demonstrating that 5–HTP is effective for reducing appetite and promoting satiety.

First study
The first took place in 1989.7 Nineteen obese female subjects with body mass index ranging between 30 and 40 (which means they were significantly obese) were included in a double–blind crossover study aimed at evaluating the effects of oral 5–HTP on feeding behavior, mood state and weight loss. Either 5–HTP (8 mg/kg/day, which would be 544 mg for a 150 lb woman) or placebo was administered for five weeks during which patients were not prescribed any dietary restrictions. The subjects took capsules of 5–HTP 30 minutes before each of three daily meals. The results were that 5–HTP resulted in no changes in mood state but reduced appetite, decreased food intake and promoted weight loss during the period of observation. Specifically, subjects reduced their daily calorie intake by 37 percent (from 2903 to 1819 calories) and ate about 98 grams less carbohydrates per day when using 5–HTP. Likewise, subjects lost about 3.3 lbs when using 5–HTP, compared to only about 1 lb lost while using a placebo.

Second study
The second study took place in 1992.8 Twenty obese patients were randomly assigned to receive either 5–HTP (900 mg/ day) or a placebo. The study was double–blinded and was for two consecutive six–week periods. No diet was prescribed during the first period, but a 1200 calorie per day diet was recommended for the second. The results were that 100 percent and 90 percent of obese subjects receiving 900 mg 5–HTP daily during two consecutive six–week study periods, respectively, reported early satiety (that is, they felt fuller sooner). The reduction in appetite was further reflected in the fact that during the first study period, the 5–HTP group reduced their daily calorie intake by 42 percent (from 3233 to 1886 calories). During the second study period, the 5–HTP group further reduced their calories by a total of 61 percent compared to the beginning of the first period (from 3233 to 1273 calories). A reduction in carbohydrate intake and a consistent presence of early satiety were also found. The placebo group experienced no significant reduction in daily calorie intake during the first or second study periods.

Significant weight loss was observed in 5–HTP–treated patients during both periods. The 5–HTP group lost about 4 lbs during the first study period, and another 7 lbs during the second study period. The total weight loss is equivalent to five percent of their starting body weight. Subjects receiving the placebo did not show any significant change in their body weight during either study period. These findings, together with the good tolerance observed, suggest that 5–HTP may be safely used to treat obesity.

Third study
The third study took place in 1998.9 Twenty–five overweight non–insulin dependent diabetic outpatients were enrolled in a double–blind, placebo–controlled study, and randomized to receive either 5–HTP (750 mg/day) or placebo for two consecutive weeks, during which no dietary restriction was prescribed. Calorie intake and eating behavior were evaluated using a daily diet diary. All 20 patients (nine from the 5–HTP group and 11 from the placebo group) completed the study. Patients receiving 5–HTP significantly reduced their daily calorie intake by 21 percent (from 1933 to 1527 calories) over a period of two weeks. This calorie reduction was the result of a decreased intake of carbohydrates and fats. The placebo group experienced no significant reduction in daily calorie intake. The 5–HTP group also lost 5 lbs during two weeks (from 190 to 185 lbs). Subjects receiving the placebo did not show any significant change in their body weight.

Note: In each of the studies, a significant number of the subjects taking 5–HTP reported mild periodic nausea, which was significantly reduced as the studies progressed. This suggests that this symptom may be considered a temporary effect of 5–HTP administration. In each case, the mild nausea was not severe enough to cause any subjects to drop out of the study. Nevertheless, nausea—however mild—is not a particularly desirable side effect. That's what makes the fourth and fifth studies particularly interesting.

Fourth study
The fourth randomized, double–blind, placebo–controlled study took place in 2009,10 lasted for two months, and included 27 healthy, overweight women. What made this study different from its predecessors was that it used a spray delivery system designed to be absorbed in the mouth and under the tongue (sublingual), rather than a tablet or capsule which must be swallowed. Researchers speculated that the sublingual delivery system would have better absorption than standard pills, and would require a far lower dose. Another difference was that the sublingual delivery system used a few other herbs in addition to Griffonia simplicifolia (as the source of 5–HTP):

The sublingual mix of herbs was used five times daily (before breakfast, lunch and dinner, and between meals). The results were that, compared to placebo, the 5HTP group experienced a significantly greater increase in their sensation of satiety. Specifically, there was 32.8 percent decrease in binge eating scores, and a 27.2 percent improvement in satiety scores. In addition, 5–HTP subjects lost 1.02 points off their BMI, 0.64 inches off their waist, and 1.06 inches off their hips. Additionally the study showed that the 5–HTP was effective absorbed in the sublingual form. Also, the sublingual mix of herbs was well tolerated, and there were no serious adverse events over the eight weeks of the study—including nausea.

Fifth study
The fifth randomized, double–blind, placebo–controlled study took place in 2012,11 lasted for four weeks, and included 20 healthy, overweight women. The same sublingual mix of herbs was used five times daily. In addition, all subjects (5–HTP and placebo groups) were trained to reduce their daily calorie intake by about 800 calories daily (e.g. if they were previously eating 2500 calories, they would now eat 1700 calories), while maintaining a prudent caloric balance of 25 percent fat, 60 percent carbohydrates and 15 percent protein. A registered dietician performed initial dietary counselling. The results were that the 5–HTP group experienced a significant decrease in appetite compared to placebo. They also lost 2.49 lbs, 0.89 points off their BMI, 0.95 inches off their waist, and 2.3 inches off their hips. As with the fourth study, no adverse events were reported.

WHO SHOULDN'T USE IT?
Serotonin syndrome is a rare, but potentially life–threatening adverse drug reaction from too much serotonin in the central nervous system and peripheral serotonin receptors. Taken in appropriate amount 5–HTP will not cause this, however 5–HTP with a serotonergic antidepressant could result in excessive serotonin levels, and could be dangerous. Do not take 5–HTP without the prior approval from your physician if you are taking such an antidepressant. These drugs include SSRIs fluoxetine (Prozac), paroxetine (Paxil), sertraline (Zoloft), and others; and tricyclic and atypical antidepressants such as amitriptyline (Elavil), clomipramine (Anafranil), imipramine (Tofranil), and others.

CONCLUSION
What is amazing is that all five of these studies on 5–HTP for appetite control are double–blind (the 'gold standard' in research), and they all demonstrate effectiveness in the overwhelming majority of the subjects using 5–HTP. Another positive aspect of 5–HTP is that it doesn't exert its appetite control qualities due to a stimulant effect. In the dietary supplement market, there have been few products with any real research to support the potential for an effective appetite control product. To some extent ephedrine (now defunct) and caffeine have had some success, but the effects diminish with time and both are central nervous system stimulants—which have adverse effect in many people. For example, many obese people have high blood pressure, and the last thing they need is additional stimulants to make their blood pressure worse. To have an effective appetite suppressant without a stimulant effect may prove to be a godsend for many people who are overweight and having trouble controlling their appetite.