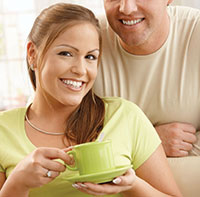 Green tea has been consumed for more than three thousand years for both its refreshing and health promoting benefits. In fact, research demonstrated that the polyphenol catechins in green tea gives it biological and medicinal qualities, including its anti oxidant, antimicrobial, blood thinning, and cholesterol lowering and anti-cancer activities, as well as its ability to promote weight loss.1,2,3,4,5,6,7,8 This article will focus on the effects of green tea on weight loss, with specific focus given to research on green tea phytosomes. But first, let’s take a brief look at the types of naturally occurring compounds found in green tea.

Green Tea’s Compounds
Green tea contains various naturally-occurring compounds, including the previously mentioned polyphenol catechins. The most important of these, which seems to impart much of the value offered by green tea, is epigallocatechin gallate (EGCG). In addition, green tea contains caffeine. It should be noted, however, that an 8-ounce cup of green tea contains about 24–45 mg of caffeine, which is far less than an 8-ounce cup of coffee which provides 95–200 mg.9 However, when green tea is processed as an herbal extract, it may provide a wide range of polyphenol catechins, EGCG and caffeine, which will be highly specific to the branded extract.

Green Tea’s Mechanism of Action To understand green tea’s mechanism of action, we first need a brief discussion of brown adipose tissue (BAT). BAT or brown fat is one of two types of fat or adipose tissue (the other being white adipose tissue, or white fat) found in mammals, including humans. The function of brown adipose tissue is BAT works to transfer energy from food (or stored body fat) into heat. This is known as thermogenesis.10 The stimulation of BAT can potentially increase total daily energy expenditure (i.e. burn more calories) and is seen as a possible target to treat obesity.11 In short, BAT thermogenesis helps burn more body fat than might otherwise be the case.12 So what does this have to do with green tea? Research has shown that green tea extract stimulates brown adipose tissue thermogenesis. In fact, it does so to an extent, which is much greater than can be attributed to its caffeine content (which is relevant since caffeine is known to stimulate thermogenesis). 13,14,15

Human Research On Green Tea
There have been a number of studies showing that green tea has weight loss benefits. In one three-day study16, subjects given a standardized green tea extract providing 270 mg catechins and 150 mg caffeine daily experienced a significant increase in energy expenditure (i.e., calories burned). In a three-month study17, subjects given the same dose of green tea extract decreased their body weight 4.6 percent (-7.7 pounds) and waist circumference by 4.48 percent (-4.14 cm). In another three-month study18, subjects who lost 11.2–14.7 pounds, and who were given the same standardized green tea found that after their initial weight loss they were able to maintain their weight loss and continue losing weight.

In a 12-week, randomized, double-blind, controlled clinical trial19, 132 overweight adults were randomly assigned to receive a green tea beverage or a control beverage (caffeine only, no catechins). Participants were asked to maintain constant energy intake and engage in moderate intensity exercise. The results were a trend toward greater loss of body weight in the green tea group compared with the control group, and significant greater reductions in total abdominal fat area (-7.7 percent versus -0.3 percent) and subcutaneous abdominal fat area (-6.2 percent versus. 0.8 percent) in the green tea group. In another 12-week, single-blind, randomized, controlled trial20, 60 overweight subjects consumed a diet consisting of 2000 kcal/daily for 12 weeks, and were equally randomized into two groups receiving either green tea capsules three times daily, or placebo. The results were that the green tea group experienced a statistically significant loss in body weight (-2.7 kg or about 6 pounds) at the end of 12 weeks, and also experienced a statistically significant increase in daily resting energy expenditure.

A systematic review and meta-analysis21 of 15 randomized controlled trials (RCTs) (η = 1243 patients) of green tea catechins (GTCs) (including those trials with and without caffeine) on anthropometric variables (i.e. weight, percentage body fat, etc.). The authors concluded that the administration of GTCs with caffeine is associated with modest, but statistically significant, reductions in BMI (0.55 points), body weight (about 3 pounds), and waist circumference (0.76 inches). While all of the research on green tea is promising, the fact remains that the total amount of body weight lost was not particularly impressive. That’s why I find the research on green tea phytosomes so interesting.


Phytosome technology creates a bond between individual polyphenol molecules in green tea and one or more molecules of the phospholipid, phosphatidylcholine (PC). Molecular imaging suggests that PC molecule(s) enwrap each polyphenol, ushering them through intestinal membrane to provide enhanced access to the bloodstream.22 In other words, green tea phytosomes are better absorbed. This was demonstrated in a study23 during which human volunteers were supplemented with single doses of green tea polyphenol catechins in free or phytosome form. Epigallocatechin gallate (EGCG) was chosen as the marker for green tea catechin absorption. The results were that green tea catechins had double the absorption when administered as phytosome rather than as free catechins. In addition, green tea phytosomes contain no caffeine.

Of course what really matters is how well green tea phytosomes work when used as part of a weight loss program. This was the subject of two human studies. The first was a multicenter clinical trial24 with 100 overweight subjects (20– 40 percent over ideal weight; 44 women and 56 men, ages 25–60). The subjects were randomly divided into two groups (A and B) of 50 subjects each. Both groups followed a balanced, reduced calorie diet (about 1,850 and 1,350 calories daily for men and women, respectively). In addition subjects in group B received 150 mg green tea phytosomes twice daily. The results showed statistically significant differences in the group taking the green tea phytosome compared to the diet only group: weight loss (30 pounds versus. 11 pounds) and decreased BMI or body mass index (12 percent versus 5 percent). In addition, the green tea phytosome group also experienced statistically significant differences in waistline, growth hormone (GH), insulin-like growth factor-1 (IGF-1, a marker for growth hormone), insulin, and cortisol (a stress hormone):

In short, subjects in both the 90-day study and 24-week study who used green tea phytosome lost significantly more weight than the control groups: 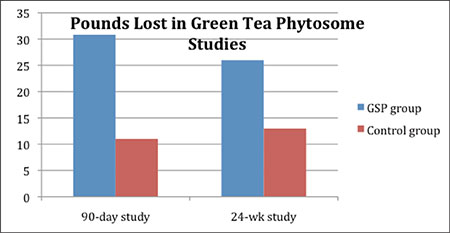 Conclusion
BAT thermogenesis induced by green tea is a promising way to burn more calories and lose weight than diet and exercise alone (although you still need to diet and exercise). Conventional green tea extracts offer relatively modest weight lost benefits. Green tea phytosomes have double the absorption of conventional green tea extracts, and offer significantly higher weight loss benefits—26–30 pounds in 90 days to 24 weeks. As an addition to a comprehensive weight loss strategy, the use of green tea phytosome (150 mg twice daily) may make sense for many overweight and obese people.