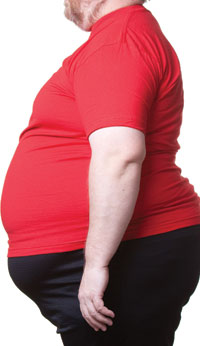 Can stress cause weight gain? The short answer is "yes." This is one of the many topics covered in the User's Guide to Weight-Loss Supplements (Basic Health Publications User's Guide paperback) and the discussion there explores one of the reasons that weight loss programs often fail. In a 1986 Dutch study, men who experienced many life events in a short period of time — one definition of stress — gained weight. This study also showed the importance of identifying and treating the problem (stress) rather than the symptom (weight gain). In these men the excessive weight had disappeared in almost all subgroups a year later. The exception was the subgroup that had tried to lose weight by dieting. The men who had dieted had gained yet more weight.

Cortisol, the Enemy
Stress, a mental term, is mirrored in the body by the release of the hormone cortisol (one of the glucocorticoids). Traditional allopathic medicine has not paid much attention to cortisol's overall effects on the body because it is very hard to measure accurately and the timing of release often is more important than the levels found in, say, the blood. Only recently has a popular market book appeared which has made the issue of stress its core analysis for why individuals gain weight in their middle years.

Glucocorticoids
One of the corticosteroid hormones produced primarily in the adrenal glands and involved in responses to stress, daily metabolic cycles and numerous other functions.

Our ability to handle physical and mental stress declines as we age. In fact, much of what we think of as a decline in the ability to handle stress seems to be an aspect of aging itself. Glucocorticoid levels typically increase and/or become markedly dysregulated as humans age. They remain chronically elevated and/or dysregulated in comparison with the levels found in young adults. According to various studies, a significant increase of serum cortisol levels during evening and night-time is found in elderly subjects when compared to young controls. Similarly, the rhythm of cortisol release is significantly affected by age.

Impaired glucose uptake and utilization by the lean tissues—arguably the very core of insulin resistance.is one of the primary metabolic effects of cortisol. Therefore, it is not difficult to grasp the connection between elevated or dysregulated cortisol levels and Syndrome X. The result is what is sometimes called "central obesity" or the "apple-shaped" in which most of the weight is carried around the midsection.

Diet and Exercise
Answers to stress and mood issues may involve supplements, but the fundamentals always need to include diet and exercise. If you find that your mood is often out of kilter and stress has you wound up, first look to your diet and lifestyle. Both eating right and exercising can go a long way in evening out mood swings and unwinding stress.

For instance, most of us realize from our own experience that getting some exercise and exposure to sunlight before lunchtime helps us to feel better. One reason goes back to cortisol and melatonin — sunlight and activity early in the day helps to reset our body’s basic rhythm, its circadian settings, so that cortisol is higher early in the day and lower in the late afternoon and evenings while the reverse is true of melatonin. Scientific studies have shown that those who get regular exercise (such as taking a twenty minute walk three times per week) suffer less from obesity, heart disease, some forms of cancer and psychological disturbances.

Two items that are commonly found in the American diet can undermine one’s outlook on life. These are caffeine and alcohol. An intake of roughly 700 milligrams or more caffeine per day (about five cups of coffee) is often associated with depression and mood swings. Caffeine causes short-term increases in blood sugar levels that can be followed by dramatic downward fluctuations. Consuming caffeine, in other words, is yet another path to the sugar “roller coaster” of energy ups and downs. Cutting out caffeine and refined sugars for as little as one week has been shown clinically to improve mood in many individuals complaining of depression. The consumption of alcohol before bedtime can have similarly distorting effects upon mood. This is because alcohol consumption interferes with the body’s natural production of melatonin and thereby disturbs the nature and restfulness of the night’s sleep.