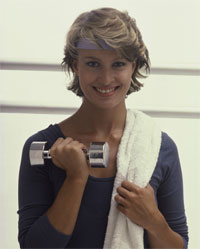 Research released by the Women’s Health Initiative ( WHI ) that showed that 1,000 mg calcium and 400 IU vitamin D in healthy postmenopausal women (between the ages of 50 to 79 years) did not reduce the risk of bone fractures. The study did show that the supplementation of calcium and vitamin D, combined with the recommended amount of calcium from the diet, significantly improved hipbone density. This study was a bit discouraging for many women who bank their bone health on just a daily calcium supplement product. There is so much more to do for bone health, including eating a wholesome diet, exercise and a healthy lifestyle. In addition, there is a branded ingredient compound called Ostivone®, known in the research as ipriflavone, which when combined with calcium has been shown to significantly increase bone density.

Keeping bones strong and vibrant is a life long process, and a eating more fruits, vegetables and whole grains is important. Dairy products contain many important nutrients, but many people cannot or do not have the desire to drink milk or consume other dairy sources. A multiple vitamin and mineral supplement may help to ensure that those needed nutrients are being consumed. Besides a wholesome diet, exercise is a critical factor. The health of bone tissue relies heavily on the utilization of nutrients and hormones in the body. Calcium is important, but other important nutrients are magnesium, zinc, manganese, copper, boron, and vitamin D from our diet.

In addition, other countries besides the U.S. have been performing research to show that nutritional supplements also promote bone health. One of these ingredients is a compound known as ipriflavone, a derivative of an isoflavone that has been shown in numerous studies to minimize bone loss in humans and animals.

Ipriflavone — a long history of use in efficacy and safety research
Ipriflavone is a flavonoid, synthetically made from the soy isoflavone, daidzein. It was discovered in the 1930s and was investigated further (with over 150 studies performed in Japan, Italy and Hungary) on its bone supporting benefits and safety in humans and animals. There have been over 50 human double-blind clinical studies performed that show its benefits. Research on ipriflavone has been presented and discussed at the American Society of Bone Mineral Research in St. Louis and Toronto.

It is a fact that there is bone mass loss after menopause with the reduction of estrogen. The efficacy of ipriflavone has encouraged researchers to include it in many bone health studies. Two double-blind, placebo-controlled studies evaluated 453 postmenopausal women between the ages of 50 and 65 with reduced radial or lumbar bone density. The women were administered with either 200 mg ipriflavone three times per day or a placebo, and 1000 mg calcium for both groups. After two years the women taking ipriflavone were shown to maintain bone mass in the spine where trabecular bone predominates and at the distal radius, which is mainly composed of cortical bone.

Trabecular bone is found in the rib cage, the skull and backbone, and cortical bone, which provides skeletal strength, is mainly found in the arms and legs. The placebo group had a significant reduction in bone mineral density. There were other bone markers that demonstrated that ipriflavone supported bone health.

Other studies performed in women with bone density problems showed a positive effect with ipriflavone. It has shown to improve bone density and a few studies have shown that it reduces bone pain.

Bone is continually broken down and regenerated, from childhood through adult life. Osteoblasts are the major cells that form bone from cartilage tissue. They help to repair bone and take calcium from the blood and deposit it into bone tissue. Osteoclasts are cells that break down bone. In adult years, osteoclasts break down bone that has deteriorated and moves the calcium to the blood.

Laboratory studies have shown that ipriflavone works by promoting osteoblast (bone building) activity and reducing osteoclast (break down bone) activity. There is research that shows that it doesn’t have an estrogenic effect like some other isoflavones.

Ipriflavone, as with other isoflavones, has been shown to be contraindicated with theophylline. In addition, one study showed that ipriflavone affected white blood cells, so it is recommended to speak with your health care practitioner prior to use. Any individuals who have a health disorder or are taking prescription medication should talk with their health care practitioner prior to taking dietary supplements.

Watching the quality of dietary supplement ingredients is important today, since many companies cut corners on quality to reduce costs. In 1997, ipriflavone as the product name Ostivone was presented with Pre-Market Notification by Technical Sourcing International, Inc. Ostivone is consistent with a high purity level and in-house quality assurance testing. TSITSITSI stands behind their high quality ingredients.

As the recent study has shown, calcium and vitamin D supplementation alone may not reduce the risk of bone fractures, but the large amount of research data on the dietary supplement Ostivone, as ipriflavone, combined with calcium provides a great hope for those who need the added bone support.

As a product development specialist, I have been pleased with the amount of good research on ipriflavone. As an avid jogger, I, myself, have been taking ipriflavone for over eight years.

Judi holds a Master's Degree in Dietetics and Exercise Physiology. She was in private practice , as a clinical nutritionist for 12 years in Colorado, including 2 1/2 years for the University of Colorado - Boulder's Human Performance Lab.


She presently operates as a technical consultant for companies in the dietary supplement industry. She performs exhaustive literature reviews on dietary supplements, writes third party scientific reports, formulates products, writes structure/function, gives scientific and educational presentations and investigates opportunities for new and unique ingredients. She has been appointed as a scientist for the AMC Cancer Center in Denver, Colorado, supporting their nutrition research. She also writes nutrition articles for magazines, completed the book New Nutrients Against Cancer and a second with Dr. Tom Slaga on Calcium D-Glucarate. She currently speaks on various nutrition topics on Channel 29 (FOX) News in Florida every week and regularly on radio programs.