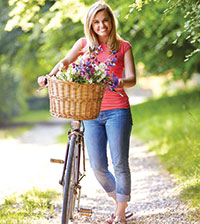 Research on the efficacy of garlic and aged garlic extract in eliminating yeast infections has focused in recent years on the potential therapeutic actions of their components, which in team fashion are strengthened in acting as remedies and providing health benefits.

Candida, the Infective Fungus
Candida albicans (C. albicans) is the most prevalent fungal pathogen in humans, causing various forms of infection, called Candidiasis that range from superficial infections of organ linings to life-threatening systemic diseases, especially in immuno-compromised patients with AIDS, cancer or organ transplantation, indicating that the mammalian immune system is a primary barrier to infectious agents.

Candida normally exists in small amounts in the human body. Present in the oral and vaginal lining, the organism can transform itself to a highly virulent form that can be lifethreatening, particularly in patients with weakened immunity.

The virulence factors of C. albicans include changes to an invasive form, adhesion to host cells and escaping host immune system.

A limited number of anti-fungal treatments are available, but these remedies often have unpleasant side effects. In addition Candida acquires resistance, requiring a switch in medication or an increase in dose. In a move to find sources of treatment other than the accepted medications fluconazole or amphotericin women have sought natural, non-drug therapy to eliminate the fungal infection.

The Nature of Candida
Candida albicans (C. albicans) is a form of yeast and a cause of oral and genital infections in humans, mostly women. Invasion of C. albicans into the blood is considered an important cause of disease and death in immuno-compromised patients (e.g., patients with AIDS, those receiving cancer chemotherapy, or those undergoing organ or bone marrow transplantation). C. albicans forms bio-films on surfaces of implanted medical devices, increasing risk of infection. A major cause of concern in hospitals are hospital-acquired Candida infections, in patients who had not been considered at risk, for example, patients in intensive care units.

C. albicans is one of many organisms that reside in the human mouth and gastrointestinal tract. Under normal conditions, C. albicans lives in 80 percent of the population, causing no harm; but overgrowth results in candidiasis. To infect tissues, the single cell form of C. albicans reacts to environmental signals and switches into an invasive form that contains many cells and has filaments (hyphae). These filaments are an essential step for C. albicans to become virulent and cause infections that can become systemic. The switch in form and the addition of the hyphae is largely controlled by a gene called SIR2.

Candidiasis and Women
Candidiasis affects around 75 percent of women, at some point in life. Symptoms of this yeast infection may vary, depending on the affected areas. Infection of the vagina or vulva causes severe itching, burning, soreness and a discharge; using douches for vaginal cleansing disturbs the normal vaginal flora that includes lactic acid bacteria, such as Lactobacilli, causing an overgrowth of Candida cells, promoting infection and local inflammation. The risk of Candidiasis increases during pregnancy, in the use of oral contraceptives, during hormone replacement therapy, and infertility treatments. Antibiotic use is also linked to an increased incidence of yeast infections, as is wearing of a wet swimsuits for long periods of time, as moisture increases Candida infection.

Medical treatment of vaginal Candidiasis by anti-fungal drugs is effective to a large extent but C. albicans develops resistance to medications, over time, and the infection returns.

For example, a popular oral medication, fluconazole, may be partially effective in treating a vaginal yeast infection, but as resistance develops over time the dose must be increased or one must switch to another medication. Many women, concerned by possible adverse effects of the medications prefer natural cures over the use of drugs.

Garlic and Kyolic Aged Garlic Extract
Garlic contains compounds with antifungal activity but many shun the fresh bulb, because of the pungent garlic odor that lingers on the skin and breath, compromising social activities and the potential of adverse gastric effects. The solution, as many sufferers of C. albicans have found out, can be a daily consumption of the odorless garlic preparation, Kyolic Aged Garlic Extract (AGE) that has antifungal compound and in addition enhances immunity.

Kyolic AGE is made by the Wakunaga of America, by a slow extraction and aging process, at room temperature; it contains largely water soluble compounds, such as S-allyl cysteine and S-allyl mercaptocysteine, as well as lipid soluble organosulfur compounds, such as Diallyl disulfide (DADS) and other beneficial compounds.

AGE is the most popular garlic supplement; it is rich in antioxidants, that help increase the power of the immune system; it has high bioavailability and its manufacturing is regulated by dependable quality control; AGE, standardized by the water soluble organosulfur compound, S-allyl cysteine, has a wide range of health effects that often surpass those of fresh garlic. Being odorless, its consumption does not have the potential anti-social drawbacks or gastrointestinal adverse effects that accompany the eating of large amounts of fresh garlic.

Garlic Extract Compounds as Therapeutic as Anti-Candida Agents
Over the last few years preclinical experiments have supported the action of garlic compounds as therapeutic agents against Candida infections, as the ubiquitous opportunistic pathogen C. albicans was found to be sensitive to garlic. AGE, contains compounds called saponins, with a particular saponin Eruboside B found by Matsuura et al, to be an antifungal agent that is active against C. albicans. Another compound contained in AGE, DADS, has also been shown in several studies to act as antifungal agent and inhibit the growth of C. albicans. The mechanism of action is complex; the organosulfur DADS kills the Candida yeast by decreasing respiration and suppressing the activity of protective enzymes and other molecules that are critical for the viability of Candida albicans.

Inhibition of the Virulent, Invasive Form of Candida
In order to transform from a single infectious cell to the virulent and invasive form, C. albicans must form filaments (hyphae), a process that is largely controlled by a gene called SIR2. A series of studies undertaken by Low et al, at the University of Putra, Malaysia, investigated the effect of a garlic extract on the transformation of C. albicans to its virulent invasive form. The investigators found that growing Candida cells in the presence of garlic extract prevented the transformation of the yeast to its hyphal, invasive form. They also found that by increasing concentration of the garlic extract there was a one and a half to two and a half fold decrease in the expression of the SIR2 gene that regulates the formation of the filaments. The investigators concluded that it is unlikely that C. albicans would develop a resistance to the garlic compounds; therefore, the anti-Candida effects of the garlic extract, in preventing transformation of Candida to its virulent pathogenic form may provide an important alternative route to treatment with antifungal medications.

Summing Up
Of all the kinds of infections caused by C. albicans, vaginitis is considered one of the most disturbing to women. Vaginal yeast infections occur when new yeast is introduced into the vaginal area, or when there is an increased quantity of yeast already present in the vagina, relative to the number of normally residing protective bacteria. Such imbalance occurs, for example, when beneficial, protective bacteria are destroyed by antibiotics that are taken to treat infections of the urinary and respiratory tracts, or some other types of infection. Other cases that increase risk of vaginitis are in the use of immune-suppressive drugs, as Candida cells can multiply, invade tissues, and cause irritation of the lining of the vagina.

Women with suppressed immune systems, for example after taking cortisone-related medications such as prednisone, develop vaginal yeast infections more frequently than women with normal immunity. Additional conditions that may predispose women to developing vaginal yeast infections include oral contraceptives, pregnancy and the use of douches or perfumed vaginal hygiene sprays.

Treatment with antifungal medications can be effective but Candida albicans develops resistance. One of the most promising treatments that rely on natural ingredients is garlic and the odor free Aged Garlic Extract (Kyolic AGE) that contain antifungal components. In addition, AGE has been shown to increase immunity, helping the body fight the Candida infections.

Though clinical trial will prove the efficacy of garlic in eradicating Candida and curing vaginitis, experimental studies show that exposing Candida cells to a variety of garlic compounds present in AGE prevents Candida from developing into the virulent invasive form that can lead to systemic infections, strongly suggesting that AGE, the odorless form of garlic may be a powerful remedy against infections by Candida albicans.